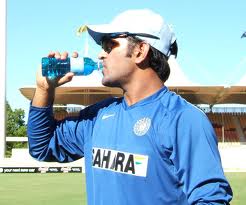 Ranchi sparkles with unabashed pride once again and this time around the credit goes to Team India captain Mahendra Singh Dhoni who’s got the Universe and all it holds at his feet.

Dhoni,who is born and brought up in Jharkhand’s capital,has given the city and the state a place of pride on the world map.

Jharkhand State Cricket Association’s President Amitabh Choudhary who led a team to construct its ‘International’stadium is already headlong into celebrating its inauguration last evening.Now,when the India vs England ODI is being played there,thousands of audience gathered there to witness the match,a record carring Dhoni’s speech deserves every body’s attention.

This speech was delivered by Dhoni during the inauguration of the stadium on January 18 evening.”For me,this day is important.The last match I had played against England was in Jamshedpur.That is history.Now,when I will play against it will mark a new chapter.First,Congratulations to JSCA president Amitabh Choudhary.

To construct this stadium,many hurdles came.But he did not give up.My friends said,this stadium is world class.The facilities available here challenge the best stadium of the world.The identity of the stadium is not made by those who sit there or by those who play.It is made by esteem and milieu.

I am confident the Saturday will be historic.We will begin a new inning.I would like to say that when I had joined the Team India,the people used to ask –where you come from.I used to tell them that I am from Jharkhand-Ranchi.That time I had to struggle to make them know where is this place.Now,when this stadium was there,I will not have to tell where I come from.Now,Jharkhand and Ranchi will have its own identity.”