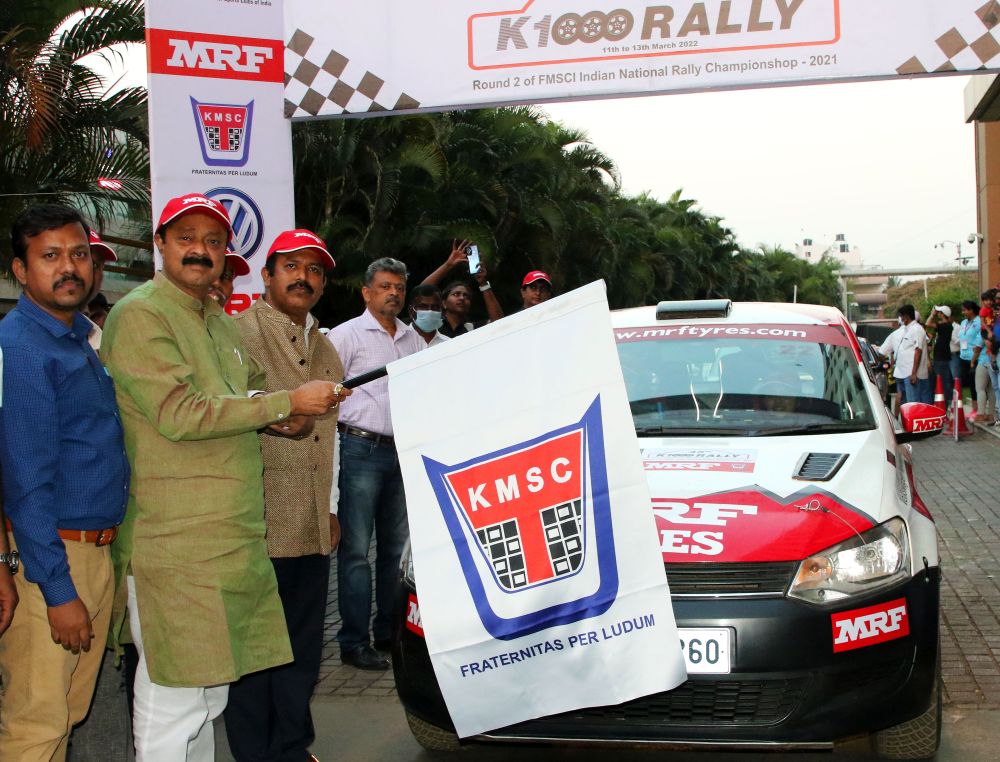 The Karnataka-1000 Rally, attracting  53 entries across all categories – INRC, INRC-2, INRC-3, INRC-4, and the FMSCI Gypsy Challenge., was flagged in Bengaluru on Friday.

The event, the second round of the FMSCI Indian National Rally Championship 2021 with MRF Tyres as Associate Sponsor was inaugurated  by Karnataka Minister for Youth Empowerment and Sports Narayana Gowda,

The competitors head to the Special Stages for two days of competition near the town of Gubbi, about 100 Kms from Bengaluru. The first Special Stage is scheduled to start at 9:15 am on Saturday.

At a pre-event Press Conference, seven times National champion Gaurav Gill, along with co-driver Musa Sherif who is participating in his 300th Rally, described the Special Stages after this morning’s reccee as “super-fast and technical”, a view shared by all competitors.

“There are some fast tarmac stretches where the speeds can touch 180kmph and there are some rough and tricky bits too. So, it is important to get the right speeds. For me, the mantra is controlled aggression to maximise the points,” Gill said.

Sherif, 50, from Kasargod, in response to felicitations on reaching a milestone, said: “It started as a hobby in 1993 but soon became a full-time passion and I never thought I would do so many rallies without a break. I thank all the drivers, sponsors, crews, teammates, and my fans, for this wonderful moment. It is they who gave me these opportunities.”

Leader in the INRC-2 category after a class win in the first round at Coimbatore a fortnight back, Palakkad’s Fabid Ahmer said: “The terrain is very technical, rough and bumpy. It is a challenge to understand the car at these speeds, but I have made good pace notes with my co-driver and am looking forward to a fast rally.”

Mujeeb Rehman, the winner of the INRC-4 class in Coimbatore, said: “The terrain is super. I like the fast stages and as they are technically tough, coordination with co-driver is very important.”

Special invitees to the press conference were two top female drivers, Dr. Shivani Pruthvi from Davangere and Pragati Gowda (Bengaluru) who recently represented India in the Formula Woman McLaren (GT) trials in England. Both concurred that the Special Stages are “fast with flowing corners”, but the terrain called for a bit of caution.

Pragathi Gowda said: “Bringing the car home will be our primary goal as the stages are quite tricky compared to Coimbatore. There are uphill and downhill sections with fast corners. We are game for it and looking forward to a good rally.”