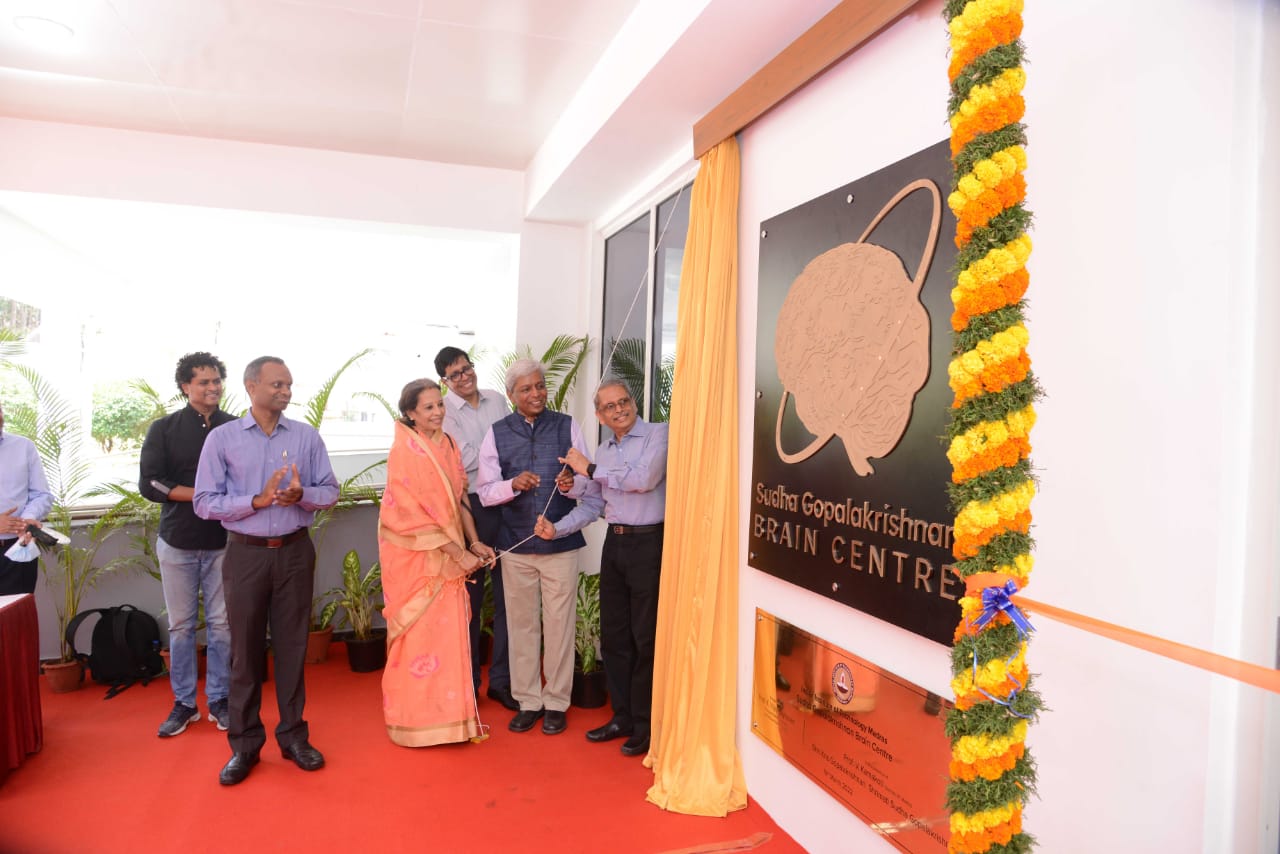 Indian Institute of Technology Madras has launched the Sudha Gopalakrishnan Brain Centre to power an ambitious Global Project to map the human brain at the cellular and connectivity levels, with a focus on high-resolution brain imaging.

It was inaugurated on 19th March in the presence of Prof. K. VijayRaghavan, Principal Scientific Adviser to the Government of India, Prof. V. Kamakoti, Director, IIT Madras, IIT Madras Distinguished Alumnus Shri Kris Gopalakrishnan, Shrimati Sudha Gopalakrishnan, and Prof. Mohanasankar Sivaprakasam of IIT Madras, who will be heading this Centre.

Separately, Prof. K. VijayRaghavan also inaugurated the AquaMAP Centre for Water Management and Policy during his visit to the IIT Madras campus in the presence of Prof. Ligy Philip, Dean (Planning), IIT Madras, and Principal Coordinator of the Centre and Alumni Donors Dr. Parasuram Balasubramanian and Mr. Krishnan Narayanan

IIT Madras plans to train hundreds of undergraduate and postgraduate students at this Centre in neuroscience and computing, machine learning techniques on cutting-edge brain data.

The Centre is supported by Mr. Kris Gopalakrishnan and Mrs. Sudha Gopalakrishnan. Their dedicated efforts in seeding research at IIT Madras at the intersection of Neuroscience and Engineering are now powering this Centre in the frontier research area of brain mapping.

Addressing the inaugural event, Prof. K. VijayRaghavan, Principal Scientific Adviser to the Government of India, said, “The combination of IIT Madras, which has the expertise in science and data analysis, with medicine is going to be revolutionary. Going forward, we have an extraordinary problem in Neuroscience, i.e. on the functioning of human brain. We are at an earlier stage in our understanding of the human brain functioning. The IIT Madras brain centre will help in solving complex issues that will benefit the world.”

Further, Prof. K. VijayRaghavan said, “The dynamic leadership of IIT Madras has shown the ability to herd different kinds of complex talent together. The IIT Madras Research Park is an example and today every institution wants to copy the model.”

The first ongoing project of the Centre titled ‘Computational and Experimental Platform for High-Resolution Terapixel Imaging of ex-vivo Human Brains’ for high-throughput light microscopic imaging of whole human brains is supported by the Office of Principal Scientific Adviser to the Government of India. Through this project, the Centre has developed a high-throughput histology pipeline that processes whole human brains into high-resolution digital images.

Using this technology platform, the Centre is imaging post-mortem human brains of different types and ages. The Centre has already acquired whole brain serial-section cell-resolution volumes of three developing brains to date. These unique first-in-class data sets that provide a high-resolution view of developing brains will be released in the near future.

Speaking on the occasion, Shri Kris Gopalakrishnan, Distinguished Alumnus of IIT Madras, said, “Entrepreneurship and development in science and technology are important for the nation’s growth. While there have been great strides in supporting entrepreneurship, there is a need for more support to foster world-class research in India. Scientists and engineers play an important role in feeding the knowledge economy of the country. The country has the right talent, resource and opportunity in leading some areas globally. ”

Congratulating the Researchers, Prof. V. Kamakoti, Director, IIT Madras, said, “The Brain Research Centre is a great case study which proves that technology can contribute to medicine and solve societal problems. The Centre will make deep in-roads in collecting data for brain research.”

Further, Prof. Mohanasankar Sivaprakasam, Department of Electrical Engineering, IIT Madras, and Head of Sudha Gopalakrishnan Brain Centre said, “The technology platform we have developed and our strong medical collaborations, is allowing us to generate high-resolution large-format histology sections of human brains that will advance the field significantly.”

Elaborating about the research work, Prof. Partha Mitra, Professor, Cold Spring Harbor Laboratory and Distinguished Visiting Chair Professor, IIT Madras, said, “3D digital neuroanatomy of the postmortem human brain with cellular resolution is a field with great potential for scientific discovery and also for the understanding of neurological disorders. The unique data sets being generated here promise to be widely impactful through open sharing with an international research community.”

This complex project was possible due to IITM’s strong collaboration with medical institutions. The clinical partners for this project are CMC Vellore led by Dr. George Varghese, National Institute of Mental Health and Neuro Sciences (NIMHANS), led by Dr. Anita Mahadevan and Saveetha Medical College and Hospital led by Dr. J. Kumutha. In addition, IIT Madras has a strong and deep international collaboration network of global leaders in brain mapping efforts in the US, EU and Japan. The Centre has six internationally renowned faculty as visiting professors at IIT Madras.

Highlighting the collaboration between IIT Madras and CMC, Dr. George Varghese, Professor, CMC Vellore, said, “The Brain Research Centre has a huge potential in solving some of the major medical issues. The research work undertaken at the Centre will help in bringing different outcomes for patients. This unusual combination of science and technology with medicine is the way to go forward. ”

Indian Institute of Technology Madras (IITM) was established in 1959 by the Government of India as an ‘Institute of National Importance.’ The activities of the Institute in various fields of Science and Technology are carried out in 16 academic departments and several advanced interdisciplinary research academic centres. The Institute offers undergraduate and postgraduate programmes leading to B.Tech., M.Sc., M.B.A., M.Tech., M.S., and Ph.D. degrees in a variety of specialisations. IITM is a residential institute with more than 600 faculty and 9,500 students. Students from 18 countries are enrolled here. IITM fosters an active entrepreneurial culture with strong curricular support and through the IITM Incubation Cell.

IITM has been ranked No.1 in the ‘Overall’ Category for the third consecutive year in India Ranking 2021 released by National Institutional Ranking Framework, Ministry of Education, Govt. of India. The Institute has also been ranked No.1 in the ‘Engineering Institutions’ category in the same Rankings for six consecutive years – from 2016 to 2021. It was also adjudged as the ‘Top innovative Institution’ in the country in Atal Ranking of Institutions on Innovation Achievements (ARIIA) in 2019, 2020 and 2021. ARIIA Ranking was launched by the Innovation Cell of Ministry of Education.