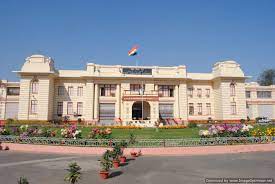 The Bihar assembly was  remained  paralysed during pre- noon period due to  protests by the opposition.

The opposition led by RJD accused the Nitish Kumar government of “dragging its feet on a state-specific caste census.”

The issue was raised soon after commencement of proceedings at 11 AM through a starred question from Leader of the Opposition and RJD leader Tejashwi Yadav. As he was not present in the House, the Speaker moved to the next listed question and members of the RJD and Left parties rose in protest.

They demanded that a statement be made by the government on the questions raised by Yadav. The question sought details of the proposed timeline for a state-specific caste census and budgetary allocation for the same.

Protest by the opposition members was strong. It appeared planned too as many of them entered into the well, forced adjournment till 11.30 hours.

And  when the House re-assembled , MLAs of the RJD and the Left again raised slogans like “sau mein nabbe shoshit hain, nabbe bhag hamaara hai” (we stand for the oppressed who constitute 90 per cent of the population and deserve a commensurate share).