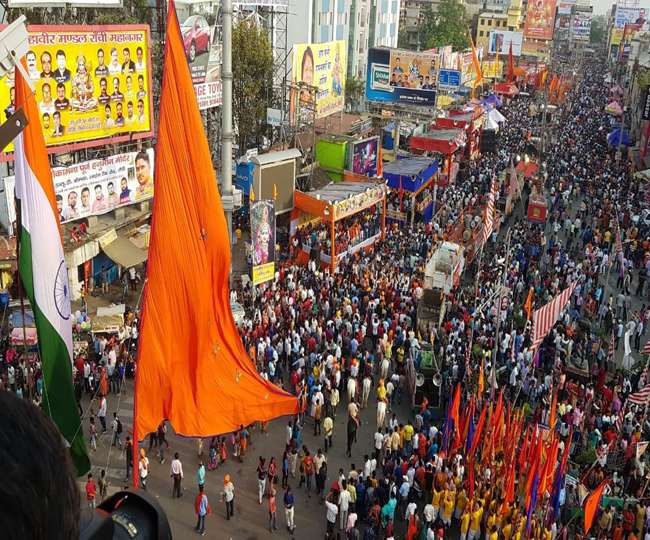 The sound of Nagada rents the air as Ramnavmi is being celebrated across Jharkhand. The state government has notified that religious processions can be held till 10 pm on Sunday.

It however maintained the cap on the congregation of people per akhara in their procession to a maximum of 100 persons despite the demand by many quarters to increase it.

Even though covid-19 cases are on the wane in the state, the state government last month came out with a standard operating procedure (SOP) for Sarhul and Ramnavami festivals restricting turnout and time cap for religious processions. Sarhul got over on April 4, Ramnavami will be celebrated on the 10th of this month. However, during Sarhul, the government remained a mute spectator to mass violation of its directives.

Ramnavami organizers, opposition BJP and its saffron wings and many from the ruling coalition government too were protesting against the Ramnavami curbs.

Following the state government’s directives issued on Friday, state health and disaster management minister Banna Gupta said, "CM has once again exhibited his sensitivity towards people sentiments. Yesterday, I personally met him to demand the changes and he gave positive assurance. I am happy that our government has taken the right decision."

JMM MLA from Giridih Sudivya Kumar, who had met CM in this regard earlier, also thanked CM.

Ramnavami akharas too welcomed the decision but many maintained that the timeline could have been completely done away with.

Mahavir Singh, a functionary of Ramvamai akhara in Hatia said, "Earlier order of procession till 6 pm was completely illogical as Ramnavami julus is often taken out in the evening. Moreover, amid the scorching heat, it was practically impossible to begin the procession early. We are happy that the time has been extended till 10 pm now. But having said so, the timeframe restriction must have been removed fully. This apart, cap on the congregation of 100 persons in processions per akhara is practically impossible to abide by even as we try."

In Ranchi alone, roughly over 200 akharas take out julus with religious flags and tableaus across different parts of the city. Capital's Albert Ekka chowk however witnesses a sea of crowds during the procession.