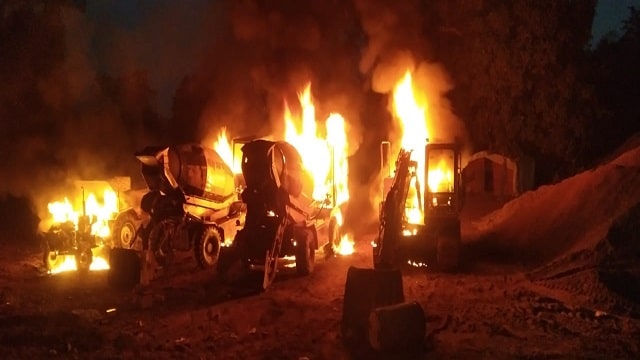 When ransom money was not paid to them, Naxals set ablaze 10 vehicles in the Latehar district of Jharkhand.

All vehicles were owned by contractors who were involved in the construction of roads and bridges. The incident took place on Saturday night.

The police today visited the site to register the FIR against the Naxals who had torched eight vehicles, including excavators and tankers of a construction company, in Baskarcha in Mahuadanr police station area on Saturday night.

In another incident that took place soon after the first one, two vehicles, including a mixer machine, were set ablaze in Potmadih in Latehar.

By circulating a pamphlet, the Naxals had claimed responsibility for setting afire these vehicles which were also being used for the construction of a bridge. This was confirmed by Deputy superintendent of police (DSP) Rajesh Kujur.

“The vehicles were burnt over extortion”( ransom money demanded by Naxals), Kujur has said.

"Police are conducting raids to nab the ultras," Kujur said.