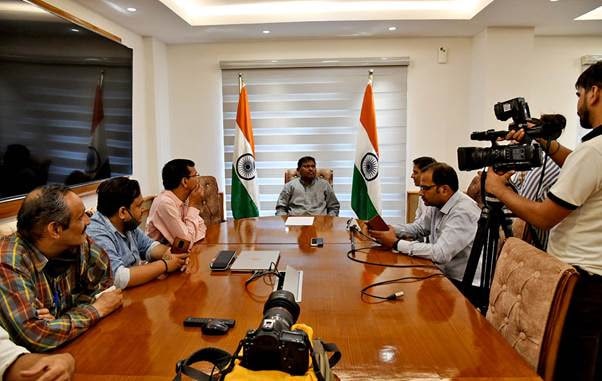 On the occasion of International Museum Day, Union Tribal Affairs Minister Shri Arjun Munda held a briefing and said the day is important as it provides  an opportunity for people across the world to know their history, culture through museums. Union Minister also said on the occasion of International Museum Day (IMD) to commemorate the Amrit Mahotsav of Azadi, the Ministry of Culture is organizing a weeklong festival in museums from 16th May to 20th May 2022 and all museums across the country under the Ministry have announced free entry for visitors during the whole week.
Shri Arjun Munda elaborated that Ministry of Tribal Affairs has important role to play in the development of Tribal Museums so that India and world can know the history of Scheduled Tribes of India.

He also highlighted the fact that under the leadership of Prime Minister, Shri Narendra Modi, Bhagwan Birsa Munda Freedom Fighters’ Museum was inaugurated in Ranchi on 15 November 2021 and for tribals across the country, it was a historic moment.

He also said that Prime Minister always emphasizes that the construction of museums and the exploration and promotion of archaeological findings should be ensured properly and the people of the country should get a chance to know their history through the museums.

Shri Arjun Munda also said Ministry of Tribal affairs through museums is taking forward the tales of valor of tribal freedom fighters who opposed the British rule and other exploiters and they started agitations for their rights against the British in their respective areas.

Union Minister added that on this International Museum Day, everyone should visit these museums with their families and get acquainted with the glorious history, culture and sacrifices of the great freedom fighters of our country.

International Museum Day is celebrated every year on 18 May all over the world. India’s culture, history and precious memories of our ancestors are kept in museums. This day is also celebrated annually to create awareness among the people about the role of museums around the world.

In India, the history of cultural heritage, its promotion and protection is present in the true narratives, lifestyles and artistic forms of indigenous or tribal people. Recognizing the need to preserve, document and promote the cultural histories of various unique tribes of India, the Ministry of Tribal Affairs has taken several proactive initiatives. One of the main objectives of the ministry is to promote tribal art and culture and also to increase awareness for the same among the youth.

On the occasion of 'Azadi Ka Amrit Mahotsav', the Government under the guidance of Prime Minister Shri Narendra Modi announced that the birth anniversary of Lord Birsa Munda would be celebrated every year as Janjatiya Gaurav Diwas.

Besides the Ranchi Museum, the Union Tribal Ministry is also setting up a national level Tribal Freedom Fighters Museum in Gujarat. Both Ranchi Museum and Gujarat Museum will be established as museums of national importance. The Prime Minister, in his speech on 15 August 2016, announced that the government wanted and was planning permanent museums in the states where the tribals lived, fought against the British colonialists and refused to accept their rule.

Taking forward the Prime Minister's vision, the Ministry of Tribal Affairs through its concerted efforts has paid tribute to the great tribal heroes by bringing to the fore tribal cultures, languages ​​and heritage and sanctioning ten freedom fighter museums across India. Ten such museums in Gujarat, Jharkhand, Andhra Pradesh, Chhattisgarh, Kerala, Madhya Pradesh, Telangana, Manipur, Mizoram and Goa will cherish the memories of tribal freedom fighters from different states where most of the tribal movements took place.

In addition, these museums will touch upon both the tangible and intangible cultural history of various tribal communities and will display important artifacts, handicrafts, sculptures, objects and histories from different eras to highlight the skills of the tribal communities of India. These museums will be the centre of special attraction of the tourists due to their location.