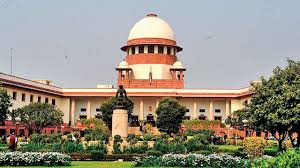 The Supreme Court has decided to hear on Friday a plea related to probes by the CBI and the Enforcement Directorate (ED) into the mining lease allegedly granted to Jharkhand Chief Minister Hemant Soren and some shell companies operated by his family members and associates.
A bench comprising Chief Justice N V Ramana and Justice Hima Kohli took note of the submissions of senior advocates Kapil Sibal and Mukul Rohatgi that this was a serious case where the probe agency has been filing sealed cover documents in the Jharkhand High Court before the issuance of notice and without giving them to the other side.

"This is a serious matter I seek to mention. A PIL was filed in the Jharkhand High Court which has not yet been admitted. Still, the ED comes and hands over sealed cover documents," one of the senior lawyers said.

The Jharkhand High Court is scheduled to continue the hearing on Thursday on the two PILs seeking CBI and ED probe into the mining lease allegedly granted to the chief minister and some shell companies operated by his family members and associates.