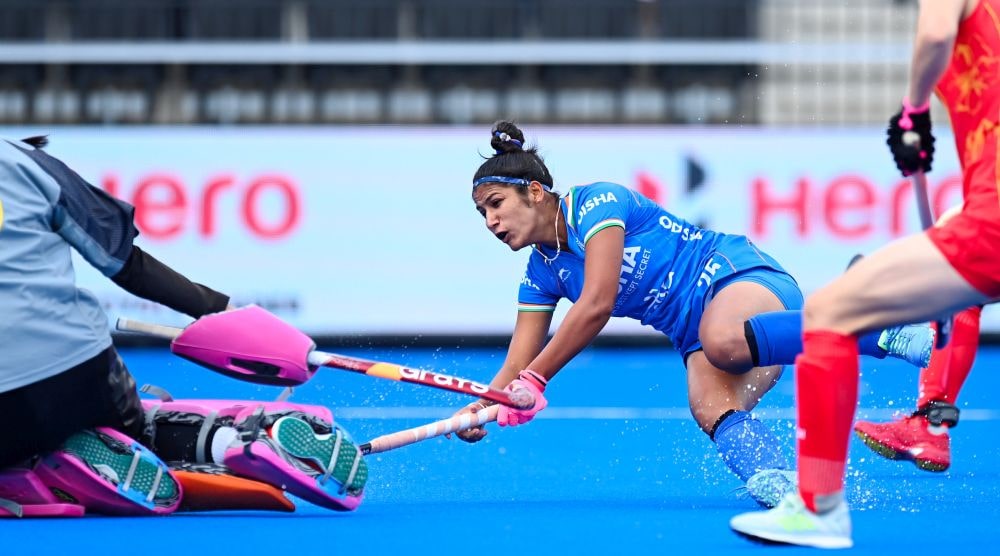 Striker Vandana Katariya's  45th minute goal enabled India to salvage a point as they snatched a 1-1 draw against China in their second pool B match here at the Women's Hockey World Cup at Amstelveen on Tuesday.

India was taken by surprise by the belligerence of the Chinese and virtually struggled for their second pool B draw.

Jiali Zheng gave China a lead in the 26th minute and it took India another 19 minutes to draw through Vandana. In their first match on Sunday, India had held England to a 1-1 draw where it was Vandana who had scored for the team while China too had drawn 2-2 against New Zealand.

India was expected to dominate the game but it was the Chinese who had more ball possession and structured their attack in the initial minutes of the game but once India shook off their nerves, they made some lethal circle penetrations that could have earned them an early lead.

One such opportunity came in the 6th minute when Sharmila Devi and Navneet Kaur worked in tandem to take a shot on goal. But Navneet's strike was blocked by a strong Chinese defence.

After ending the first quarter in a stalemate, India penetrated the Chinese defence on a number of occasions in the second quarter. In the 23rd minute, a PC awarded to India was contested and the referral went in favour of China.

It was a shot taken by Vandana from top of the D which bounced off Jyoti's body into the goal, after she missed getting a deflection thus resulting in the referral going against India.

But only seconds later, India found the foot of Chinese defender winning their first PC of the match. But this chance went amiss too as Gurjit Kaur's powerful drag flick was blocked away by the Chinese goalie Liu Ping.

China, however, did not falter when their attackers created a sublime variation that resulted in a goal. It was Jiali Zheng who put the ball past India's experienced goalkeeper Savita in the 26th minute. Meanwhile, India continued to work some impressive formations in their attack, earning the team another PC in the 27th minute but Monika who took the shot couldn't make much of the chance, thus ending the second quarter with China leading 1-0. Both teams displayed attacking hockey coupled with speed and patience in their efforts.

The third quarter saw China fetching their first PC of the match but couldn't make much of it with Gu Bingfeng's drag going wide. India, who won a couple of PCs in this quarter remained calm in their pursuit for a goal. Their wait finally ended in the 45th minute when the team converted from their 5th PC of the match. It was the experienced striker Vandana Katariya, who once again,  picked up a brilliant deflection off Gurjit's fiercely-struck drag flick sending the ball flying past the Chinese goalie.  (1-1)

With an even score on the board,. India showed more urgency to convert a goal in the final quarter and they also defended well to keep the pressure on their opponents. They even warded off danger in the 56th minute when they conceded a PC, but they did well with the line defence to clear the ball. Both teams contested for the ball in the dying minutes of the game, bringing the viewers to the edge of their seats.

With seconds ticking away, neither could successfully score despite China calling for a video referral asking for a PC on the hooter. With this match too ending in a stalemate, India will have to win their last round robin league match on Thursday.