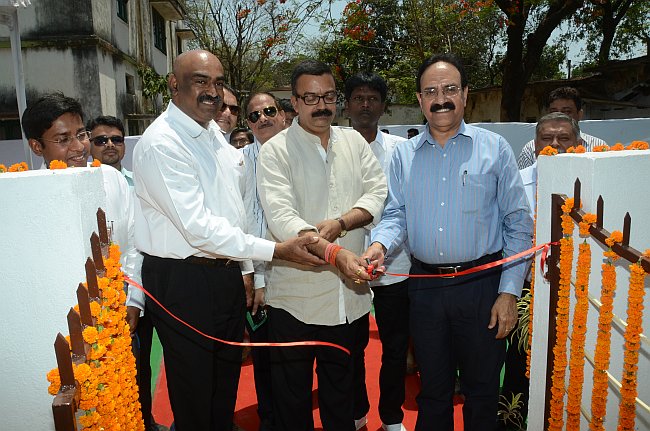 Check the air to breathe it

The project is meant to benifit the residents of Jharkhand’s capital.

Manishankar, Chairman, Jharkhand State Pollution Control Board was present as the Chief Guest and A Malhotra, Principal Conservator of Forest, Government of Jharkhand as the Guest of Honour.

The CAAQMS was installed by Tata Steel at the Bhavan in October, 2012.It is one of the several green initiatives that the Company has adopted to contribute to a greener planet as it believes that effective management of environmental impacts is a key to integrating environment management into everyday practice.

This project costing Rs 82 lakhs provides the ambient air quality data in respect of pollutants like Particulate Matter (PM10, PM2.5), Sulphur dioxide (SO2), Nitrogen Oxides (NOx) and Carbon monoxide(CO). This is continuous facility working 24X7 with data archiving facility while displaying instantly the information on digital display board located near the entrance of Van Bhawan.

Particulate matter (PM) are tiny pieces of solid or liquid matter associated with the Earth’s atmosphere.

Larger particles (greater than 10 micrometers in diameter) tend to settle to the ground by gravity in a matter of hours. The effects of inhaling particulate matter that have been widely studied in humans and animals now include asthma, lung cancer, cardiovascular issues, respiratory diseases, birth defects, and premature death.

Health effects caused by exposure to high levels of SO2 include breathing problems, respiratory illness,changes in the lung’s defences, and worsening respiratory and cardiovascular disease. SO2 along with nitrogen oxides are the main precursors of acid rain. This contributes to the acidification of lakes and streams, accelerated corrosion of buildings and reduced visibility.

The U.S. Department of Labor’s Occupational Safety & Health Association (OSHA) classifies carbon monoxide as an asphyxiant, which means that it displaces oxygen and causes symptoms including death from asphyxiation or lack of oxygen to the bloodstream and therefore to the brain.

While inaugurating the facility Chairman, JSPCB congratulated the joint efforts of Tata Steel and JSPCB for pioneering the initiative and thanked the Forest & Environment Dept, Jharkhand for providing the space. He has highlighted adverse impact of Particulate pollution from automobiles and awareness is a first step for controlling the pollution.

Malhotra thanked,appreciated the Tata Steel and said such continuous measurement of ambient quality outside industry in a city is first of its kind in Jharkhand. He further highlighted importance of greenery in city for reducing the pollution.

Mr. S K Sinha, Member Secretary, Jharkhand State Pollution Control Board has stated the knowing about the levels of pollution is a prerequisite for controlling the pollution.

Sunil Bhaskarn Dy. VP, Corporate Services, Tata Steel. has expressed his willingness to work with State Government on such initiative as a good corporate citizen.