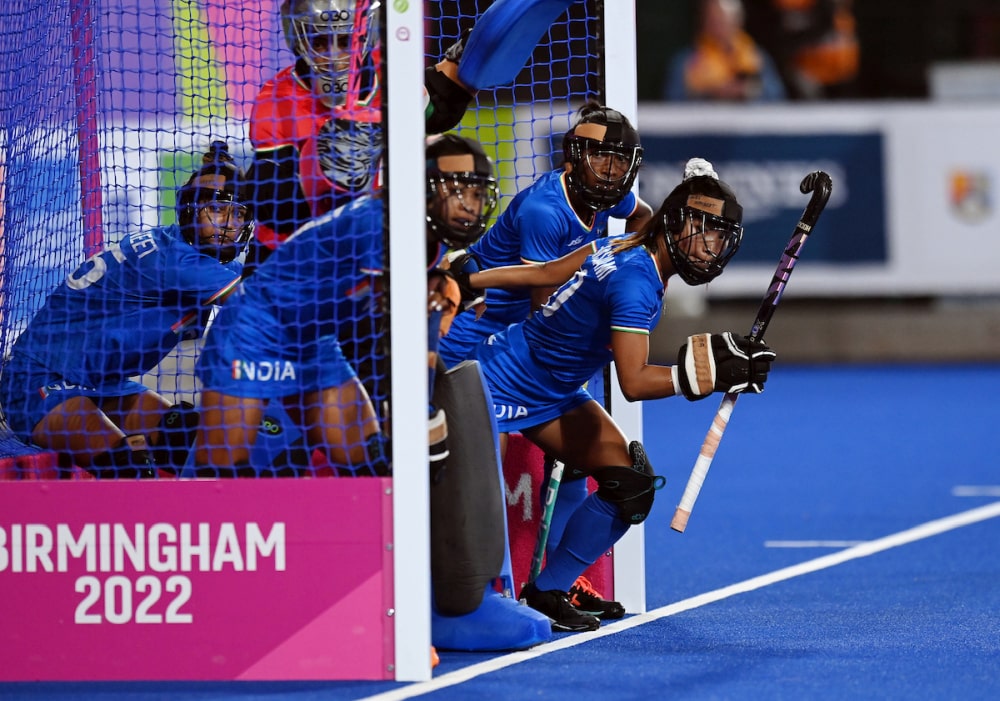 In an edge-of-the-seat match, India went down fighting to Australia 0-3 in a penalty shootout after playing !-1 draw in at the end of the regulation period in the semifinal of the Women's Hockey tournament at the Commonwealth Games in Birmingham.

India will now take on New Zealand in the 3/4 placing match while Australia will clash with England for the title on Sunday.

The girls in blue put up a gritty display in the regulation time which ended in 1-1 resulting in the penalty shootout in which they missed out on converting their attempts in the shootout.

Ambrosia Malone, Amy Lawton and Kaitlin Nobbs scored goals for Australia in the shootout. Lalremsiami, Neha Goel and Navneet Kaur failed to convert for the losers.

In the regulation period, Rebecca Greiner (10’)  put Australia ahead but Vandana  Katariya drew parity in the 49th minute.

Australia opened the game with a high pace and aggression but the Indians kept their calm as they looked to create opportunities early on.

Australia’s strategy paid off as they came close to scoring an early goal through a deflection but Savita made an outstanding save. After an incident and injury scare in the middle of the field, Australia was awarded a free kick, but they failed to captalize on it.

Indian countered and. Navneet Kaur won a penalty corner shortly after, but it was muffed.

Australia stepped up its offensive, which was rewarded when Rebecca Greiner scored a tap-in goal in the 10th minute to give them the lead.

They had another opportunity to double their lead, but Monika's outstanding defence prevented it.

In the last minutes of the first quarter, India earned a free hit and a penalty corner, but it was not enough to level the contest.

Trailing by a goal, India began the second quarter on offence and were successful in piling pressure on the rival defence from the right flank. They kept up the pressure in search of an equaliser and came close to an equalizer after Neha won a penalty corner.

However, the Australian goalkeeper saved Gurjit Kaur's on-point attempt. In the 24th minute, Sangita took a great shot at the goal post, but Aleisha Power saved it.

With five minutes remaining, India won another PC, but could not convert it. Thereafter, both teams battled for dominance in the mid-field as the second quarter came to a close.

India began the third quarter on top, with Salima Tete leading the charge. Vandana Katariya and Navneet Kaur also made some crucial runs and passes as they rattled the rival's defence.

As the game progressed, Australia came into the play with Shanea Tonkin making a piercing run inside the opposition circle but her shot went wide. However, this did not stop India from pushing for an equaliser and came within inches of scoring the equaliser after a strong shot from Navneet Kaur, but Lalremsiami was slow to react to the pass.

Australia won five consecutive PCs during the final minutes of the third quarter, but India did well to prevent them from scoring.

There was a sense of urgency among Indian players as the fourth quarter started, looking to level the contest and the efforts were rewarded when Vandana Katariya scored in the 49th minute after being set by Sushila Chanu.

Moments later, India had a chance to go one up after Vandana Katariya won a PC, but, it did not transpire into anything. After India’s equalizer, both sides increased their attacking in search of their second goal but were not successful as the game went to a shootout.

In another semifinal, England beat 2018 Gold medal winner New Zealand 2-0 also in the penalty shootout after both the teams were deadlocked 0-0 at the end of the regulation period