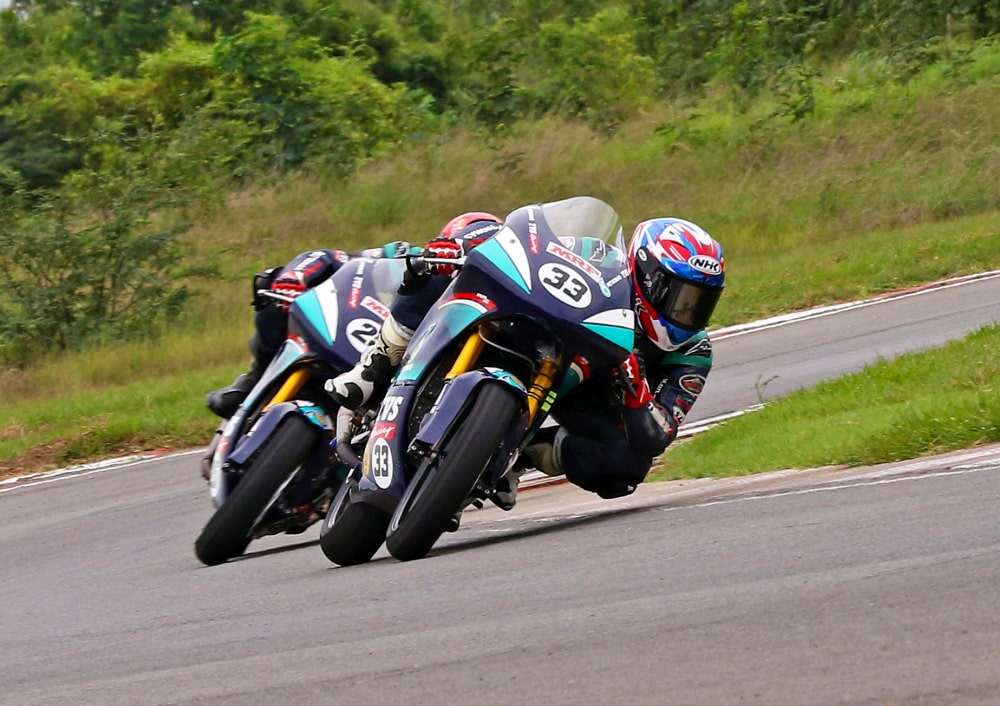 KY Ahamed led a 1-2 finish for Petronas TVS Racing while Rajiv Sethu recorded his first win of the season and Sarvesh Balappa his fifth in a row in their respective categories after the third round of the Indian National Motorcycle Racing Championship at the Madras International Circuit, here on Saturday.

Ahamed scored a deserving win in the premier Pro-Stock 301-400cc Open category with team-mate Deepak Ravikumar in tow even while the unbeaten run of champion Rajini Krishnan (RACR Castrol Power1) who had won the previous four races over two rounds, ended as he went off the track when in the lead due to mechanical issues, but managed to finish third.

Ahamed, starting from P2 behind pole-sitter Ravikumar, made a decisive move in the last lap to get ahead for a deserving maiden victory of the season in this category. The results notwithstanding, Rajini Krishnan continues to lead the championship table following his four-in-a-row winning sequence over the previous two rounds, with a healthy 44-point advantage over Ravikumar with Ahamed a further 10 points behind, going into Race-2 on Sunday.

In a heart-stopper Pro-Stock 165cc race, Rajiv Sethu fought and won a tense battle that kept the final outcome in suspense until the very finish where the lead Honda star held off Petronas TVS Racing pair of Deepak Ravikumar and KY Ahamed even as leader and pole-sitter Prabhu Arunagiri (Pacer Yamaha) crashed in the dying moments of the six-lap race.

Sarvesh Balappa, a 23-year-old mechanical student from Hubballi, chalked up his fifth win in a row in the Novice (Stock 165cc) category in a race that was reduced to four laps from scheduled six following multiple crashes in the very first lap. All riders in the crashes escaped with minor injuries.

Balappa, starting from P4 on the 33-rider grid, kept his wits amidst the chaotic first lap. On restart, the Hubballi rider made his way up the field and seized the lead which he defended with aplomb, even looking behind as he approached the finish line to take the chequered flag.