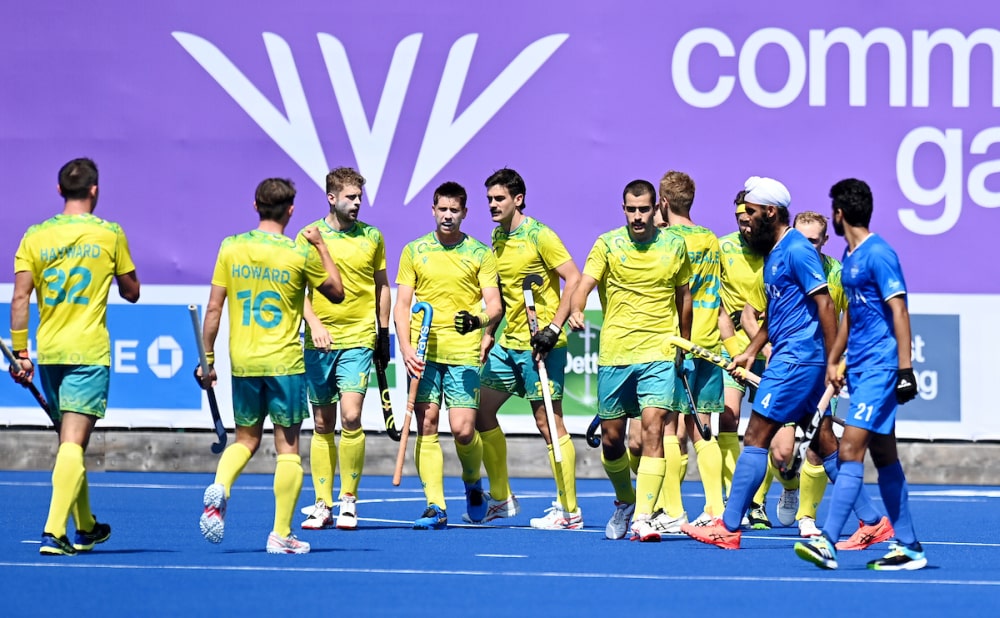 India's hope of elusive Commonwealth Games Hockey gold medal went up in smoke as dominant Australia deconstructed Men in Blue India with a 7-0 thrashing at   Birmingham on Monday.

This was seventh successive gold for Australia in Men's hockey since this sport was included in the Games in 1998.  For India this was their third Silver having earlier finished runners up in 2010 and 2014.

India came into the Final on the back of some fine performances in the group stage as they beat Ghana 11-0, drew against England 4-4, beat Canada 8-0 and Wales 4-1 followed by a 3-2 win against South Africa in the Semifinal.

Just like in 2010 at Delhi, the Australian once again displayed awesome firepower before the packed stadium and by the end of the 30th minute they had turned the final into a totally one-sided affair.

Whatever plans Indians might have had were not allowed to be implemented by the marauding Australians and from the very start champions controlled the game and never let go their strangle hold over the proceedings throughout.

The Australian got off the blocks at rampaging pace, but somehow India survived the onslaught in the initial few minutes,

Australia was quick to take a 1-0 lead when they earned the third PC of the game in 9th minute. Blake Govers was on target this time, beating Sreejesh to the goal. They extended the lead in the 14th minute when Nathan Ephraums scored a field goal.

While the Australian strikers displayed sublime form and coordination, their defence ensured India found no space in the circle to create any scoring opportunity.

While Indian attackers struggled to find a breakthrough, Australia went on to pump three more goals in the second quarter through Jacob Anderson (22', 27') and Tom Wickham (26').

Trailing 0-5 at half time , Indian had their task cut out for the third quarter when Australia returned with similar gumption as the first two quarters. Although India did not concede a goal in this quarter, they were denied any chance of scoring even though India forward Mandeep Singh and Abhishek worked some good variations but nothing came of it.

India also lost their Captain Manpreet Singh midway into the game, as he walked out of the pitch having dealt with a massive blow on his right shoulder.

In Manpreet's absence , the onus was on Hardik and Nilakanta who had to free up space in the midfield to help forwards surge ahead. But tactical defence by Australia put immense pressure on the Indians .

Australia pumped two more goals in the final quarter. It was Ephraums who scored in the 42nd minute followed by Flynn Ogilvie's goal in the 46th minute.  There was nothing India could do but watch helplessly as Australians chalked out their seventh successive title win at the Commonwealth Games.