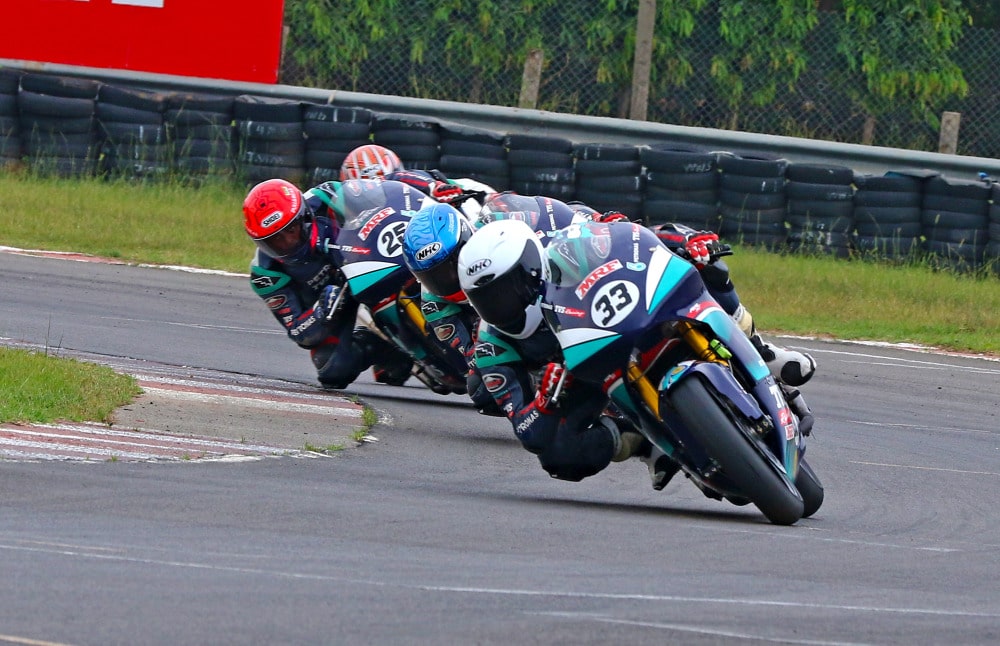 KY Ahamed of Petronas TVS Racing completed a hat-trick of wins in the premier Pro-Stock 301-400cc category, while  Rajini Krishnan moved within one point of clinching the title after a third-place finish in the fifth and final round of the MRF  Indian National Motorcycle Racing Championship at the Madras International Circuit, here on Saturday.

Meanwhile, Petronas TVS Racing’s Jagan Kumar notched his second win of the season in the Pro-Stock 165cc Open category, Idemitsu Honda SK69 Racing’s Rajiv Sethu edged out championship leader Mathana Kumar (Pacer Yamaha) for second place to narrow the points deficit to 14 with one more race to be run on the morrow.

In the Pro-Stock 301-400cc Open race,  Ahamed led a 1-2 finish for his team with Deepak Ravikumar in tow, while Rajini Krishnan (RACR Castrol Power1), starting from P4, struggled with a clutch pedal issue, but used his vast experience to good effect and managed to scramble to third position.

The result means that defending champion Rajini needs just one point from tomorrow’s concluding race to seal his 11th career National title. Ahamed trails the champion by 25 points with Ravikumar in third, a further eight behind.

Earlier, Coimbatore’s Rohan Ramesh fashioned a 1-2 for Axor Sparks Racing in the Novice (Stock 165cc) category ahead of Kayan Zubin Patel (Mumbai) with Vignesh Goud, a privateer from Hyderabad in third.

Hubballi’s Sarvesh Balappa, also of Axor Sparks Racing, came in fourth, but he has effectively clinched the title in this category as he leads by 54 points going into tomorrow’s Race-2.

In the Rookie class of the Petronas Racing One-Make Championship organised by MMSC, Bengaluru’s Chiranth Vishwanath posted his ninth win in as many races as did Mumbai youngster Raheesh Mudassar Khatri in the Novice (CBR 150) category of the Idemitsu Honda India Talent Cup.