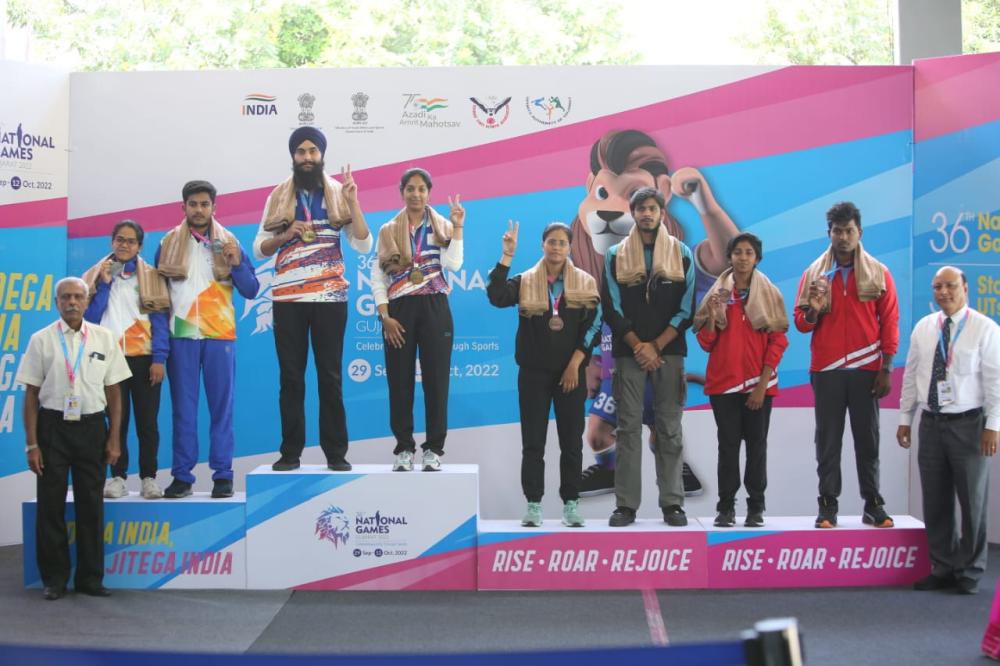 The 18-year-old Ramita and Arshdeep Singh, 26, made the title match appear pretty one-sided belying expectations of a close contest after the Madhya Pradesh team had topped qualification 0.2 points ahead of Haryana.

It was Haryana’s second gold in the Shooting competition and helped the State’s gold medal haul touch double figures.

Uttar Pradesh climbed to the second spot on the medal chart by winning both the men and women’s 5000m races at IIT Gandhinagar through Abhishek Pal and Parul Chaudhary. Meanwhile, Services got in the frame with Subhash Lahre’s gold in the men’s 67kg class weightlifting competition at Mahatma Mandir Complex.

Abhishek Pal and Parul Chaudhary had both secured a fifth-place finish in the 2015 National Games but they asserted their superiority over the rest of the field to claim gold medals. Abhishek Pal won in 14:07.25s, beating two Services runners, Karitk Kumar and Sawan Barwal, as well as the defending champion G Lakshmanan.

Parul Chaudhary was pleased that she could win her maiden National Games gold despite not having not done much speed work in training since the World Athletics Championships in July this year. She stayed close to the leaders and produced a kick that brooked no response from others. Parul Chaudhary won in 16:34.68.

In the absence of Commonwealth Games Weightlifting gold medallist Jeremy Lalrinnunga, Subhash Lahre, who hails from Chhattisgarh, picked up gold with total lifts of 275kg. K Neelam Raju (Andhra Pradesh) and Sushant Sahu (Odisha) had identical total lifts of 270kg, but the former won silver due to his lighter body weight.

Neelam Raju sought to put Subhash Lahre under pressure by attempting a 153kg Clean and Jerk but he failed in his pursuit. He then had to endure a tense wait to be assured of a silver medal as Sushant Sahu tried to change his place on the podium. However, since the Odia lifter was unable to clear his attempt to lift 154kg, Neelam Raju could heave a sigh of relief and take silver.

Jeremy Lalrinnunga’s friend and Mizoram team-mate Jacob Vanlaltluanga, who also started his career at the Army Sports Institute in Pune, could have provided a good challenge. But he did not look in his elements, managing only one legal lift of 120kgs in Snatch and finishing with three no-lifts in Clean and Jerk.