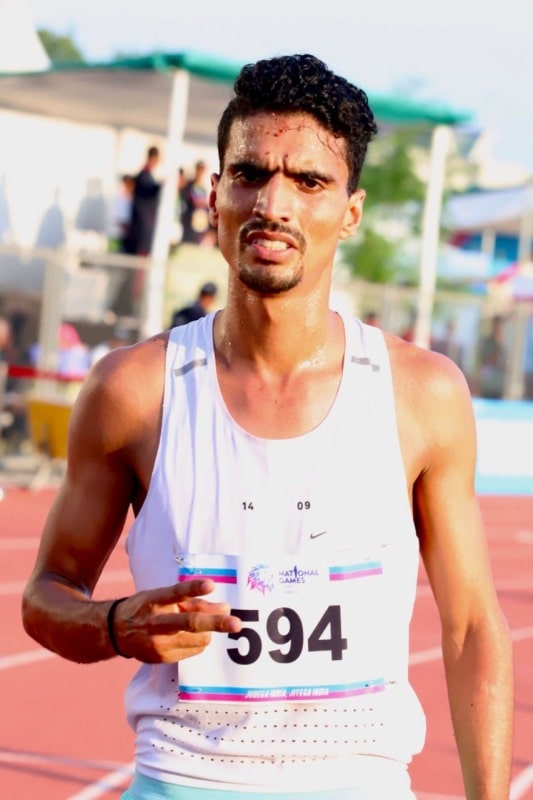 Armyman Gulveer Singh set up a new  Games record while clinching the gold in the  10,000m Athletics competition and in the process helped Services consolidate their position at the top of the 36th National Games medal charts here on Monday.

Gulveer Singh had an advantage over his main rivals, Uttar Pradesh’s Abhishek Pal and Kartik Kumar, as they had to recover from the rigours of their triumphant 5000m run 48 hours earlier.

For much of the race, he tailed his teammates Sawan Barwal as well as Kartik Kumar and Abhishek Pal. He, however, made a decisive shift with about 250m to go to emerge the winner in 28:54.29.

Abhishek Pal spiritedly overtook the leader from the outside but seemed to lose his rhythm a bit on the curve. He then had to fight hard to keep his silver medal position, with Kartik Kumar summoning his last ounces of energy to mount a challenge over the last few metres.

For someone who took to competitive running only after he joined the 23 Grenadiers of the Army a couple of years ago, Gulveer Singh has made strong strides in his debut season. Starting with a bronze in the Federation Cup in April and rising to silver in the National Inter-State Championships in June, he was pleased that he won a hard-fought race.

“I knew that Abhishek, Kartik and Sawan, my seniors with whom I train, are all excellent runners. I just had to be with them and try and outsprint them in the end. I am glad I was able to do that,” said Gulveer Singh, who hails from Sirsa village in the Aligarh district of Uttar Pradesh. “I think my coach will be happy with what I did in the race today.”

Gujarat’s Murli Gavit, who was expected to pose a strong challenge in the 10,000m, came up with his best effort over the distance since the Asian Athletics Championships in Doha in April 2019 but finished fifth in 29:43.53. He could not stick to the front-running pack of four when they increased the pace at the halfway stage.

Later, Himachal Pradesh’s Seema won the women’s 10,000m gold when the jury disqualified Maharashtra’s Sanjivani Jadhav for a lane infringement. With less than a lap to go for the finish, the visibly tiring front-runner stumbled and stepped inside the border to earn a disqualification from the jury.

Sanjivani tried to take down OP Jaisha’ Games mark of 33:08.55 in the women’s 10,000m but the rising heat left her just over half a minute short. She broke free of the rest of the pack after 10 laps and bravely pushed herself against the clock. She strained on the final lap, staggering over the last 100m and collapsing across the line. But the real shock came later.

Seema,  could not match Sanjivani’s pace in the first half of the race and was content to focus on retaining her position in the race, little realising that a golden stroke of luck was awaiting her after the race was completed.