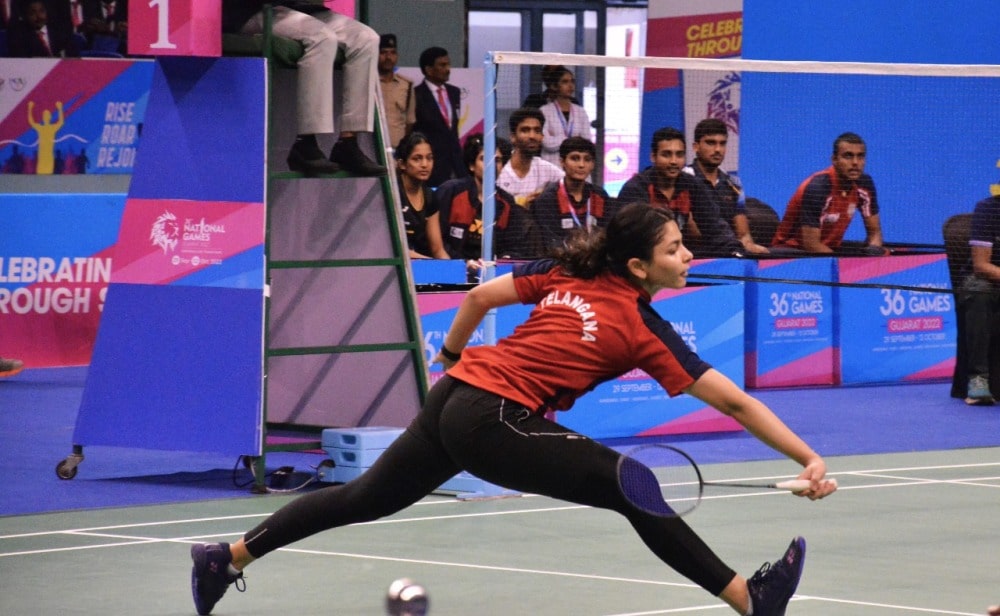 Samiya Farooqui, then, beat TR Gowrikrishna 21-5, 21-12 to seal the match for Telangana.

Telangana decided to field the experienced Sumeeth and Sikki in the opening Mixed Doubles ahead of Vishnuvardhan Goud and Gayatri Gopichand, who had lost against Maharashtra.

“We only gave the coach the option of trying us out,’’ Sumeeth said, even though they had last played together way back in the 2021 Thailand Open.

The couple fumbled at the start as the speedy Arjun and Treesa jumped into an early 5-2 lead. “We were playing after a long time. We don’t even practice together as we quite often get into arguments. It took some time to get into a rhythm. But once we found our groove, we got into a good rhythm,’’ a smiling Sikki said.

The Kerala pair, however, fought back to win the second game, with Arjun sending powerful smashes from the backline and Treesa being efficient at the net. The third game went close till 12-all before a change of strategy did the trick for Telangana.

“I think the turning point was when I went for variations in my service, not giving them any length,’’ Sikki explained.

The next match was crucial, with Prannoy, who is currently ranked 16th in the world and is enjoying a dream season, starting as the favourite. “I knew it would be a tough match, especially as we know each other’s game as we often train together. But gradually I found my strokes,’’  said Praneeth,

The first game was played fiercely. A tentative Praneeth made a few unforced errors while Prannoy looked good with his all-around game. They went neck-and-neck till 18-18 before Prannoy clinched it with a couple of well-measured shots.

Praneeth was in full flow in the second game, with his repertoire of strokes catching Prannoy on the wrong foot. He surged ahead for a 13-7 lead and held on to it to make it 1-1.

Even in the third game, Praneeth built a healthy lead of 13-7 before Prannoy clawed back to make it 18-18 all.

“I was suddenly blank as Prannoy began to play a fast game. With the shuttle also coming off slowly, I was a little taken aback. But luckily, I held on to my nerves and pulled off this crucial win. It will boost my morale,” Praneeth explained.