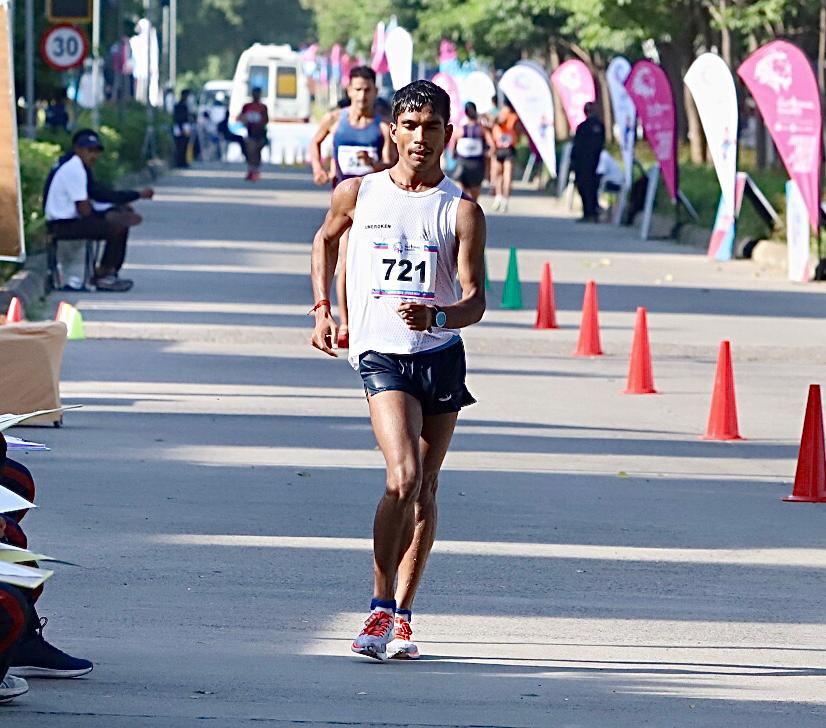 It is the fifth National record set at the Games here and the third in Track and Field sport after the women and men’s Pole Vault records by Rosy Meena Paulraj (Tamil Nadu) and Siva Subramaniam (Services) respectively. There have been two National records at the Weightlifting arena in Mahatma Mandir.Ram Baboo started well and looked set to finish with a faster time due to heat he slowed down. The 23-year-old  however was pleased that he could beat Juned Khan with more than three and a half minutes to spare. “I will keep working hard to replicate such time on an international platform too,” he said.

An injury in 2018 had forced Ram Baboo to stop his pursuit of running and take to Race Walking.

In the weightlifting arena, Uttar Pradesh’s Purnima Pandey overcame a stiff back and clinched gold in the women’s +87kg class at the Mahatma Mandir.

Purnima, who finished sixth at the 2022 Commonwealth Games, took the top spot on the podium with total lifts of 215kg, with 95kg in Snatch and 120kg in Clean & Jerk.

Maharashtra also claimed the Kho Kho golden double after the men defeated Kerala 30-26 after leading 26-10 at the half-time. The women’s team had earlier dashed Odisha’s dream with a 18-16 win that was built almost entirely in the first half when the western State opened up a 18-8 lead.

In Rajkot, Gujarat’s leading swimmer Maana Patel competing in individual events today after swimming in relays for last two days. She topped the heats in both 200m Backstroke (2:24.05) and 50m Freestyle. Her Backstroke rival, Ridhima Veerendra Kumar (Karnataka) won her heat with a time of 2:25.64.

Maana Patel broke the National Games record in the Freestyle sprint clocking a personal best time of 26.60 seconds to better the mark of 26.90 achieved by Aditi Dhumatkar in 2015. She dislodged National champion Avantika Chawan (Maharashtra) in the third place on the all-time Indian list behind Shikha Tandon and Kenisha Gupta.

In Surat, top-seeded left-hander Malvika Bansod (Maharashtra) quelled the challenge of Unnati Hooda (Haryana) in the women’s singles first round with a 22-20, 21-13 win in a contest that fans watched with interest. Unnati, who hails from the Wrestling hub of Rohtak, had beaten Malvika in their first meeting earlier this year but the Nagpur player got one back last month.

Meanwhile, Maharashtra’s Arjun Kadhe (Maharashtra) will meet Manish Suresh Kumar (Tamil Nadu) in the men’s singles final while Gujarat’s Zeel Desai will vie for the women’s singles crown with Karnataka’s Sharmada Balu in the Tennis competition at the Riverfront Sports Complex in Ahmedabad.