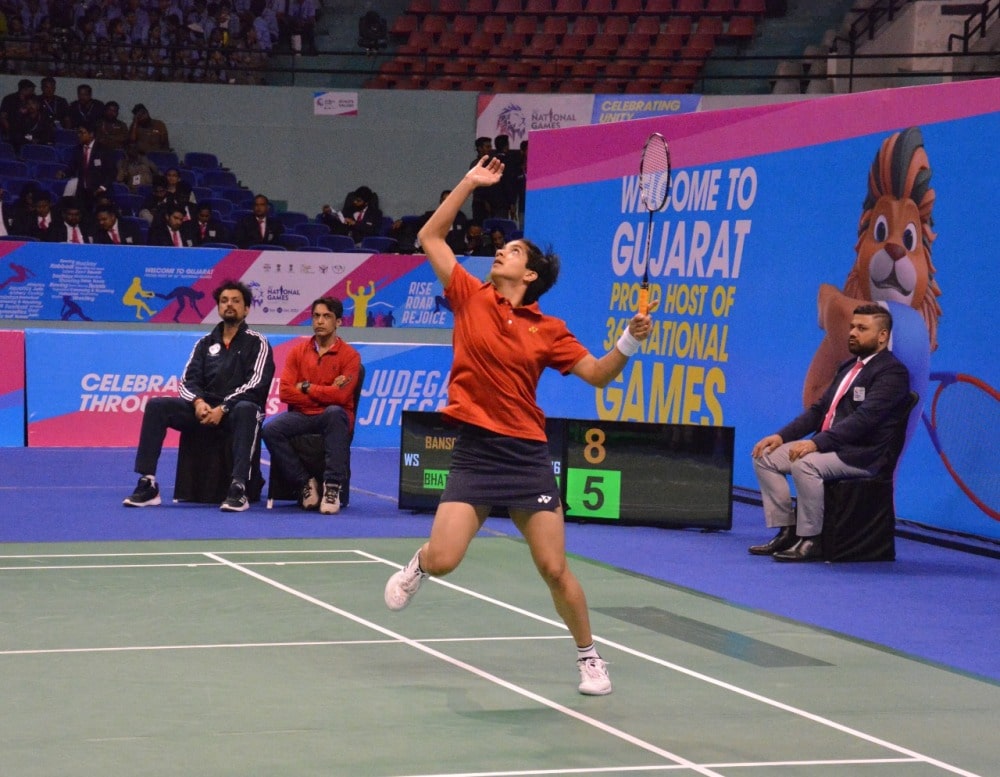 The semi-finals of the  Badminton singles turned out to be one-sided affairs as former national champion B Sai Praneeth (Telangana) and  Karnataka’s Mithun Manjunath chalked out easy victories over their rivals to set up a title clash in the event of the 36th National Games here on Thursday.

In the semifinals, played at the PDDU Indoor Stadium here, Sai Praneeth downed M Raghu of Karnataka 21-12, 21-19 while Mithun was clearly the dominant player in his 21-9, 21-11 victory over Gujarat’s Aryamann Tandon.

Aryamann Tandon, who became the first Gujarat badminton player to win a National Games medal, could not find a way past Mithun on Wednesday. “I had no answers to his shots,’’ admitted Aryamann, who has trained with Mithun at the Prakash Padukone Academy in the past. “I knew his game. I was confident and I had decided to play an attacking game from the start. I had prepared for this match. But nothing worked.”

In the Women’s semi-final, Malvika Bansod was pushed to the brink by Aditi Bhatt of Uttarakhand. However, the top seed banked on her experience to put behind her second game reversal to win 21-10, 19-21, 21-13.

Aakarshi Kashyap had a far easier outing as she trounced Karnataka’s Tanya Hemanth 21-9, 21-15.

The Karnataka pair will take on the Delhi duo of Rohan Kapoor and Kanika Kanwal, who defeated S Sanjith and TR Gowrikrishnan (Kerala) 24-22, 21-18.

Playing for the first time in a big tournament with Gayatri Gopichand, left-handed Sikki had to adjust her game with her partner in Women’s Doubles. “We never played together in a big match. She had never partnered a left-hander either but we jelled nicely,’’ said Sikki after routing the Delhi pair of Kavya Gupta and Khushi Gupta 21-16, 21-17.

In the final, the Telangana duo will meet Shikha Gautam and Ashwini Bhat (Karnataka), who defeated Kerala’s Mahreen Riza and Arathi Sara Sunil 23-21, 21-11.

The Men’s Doubles final will be between PS Ravikrishna and Shankar Prasad Udaykumar of Karnataka and Hariharan Amsakarunan and Ruban Kumar of Tamil Nadu.