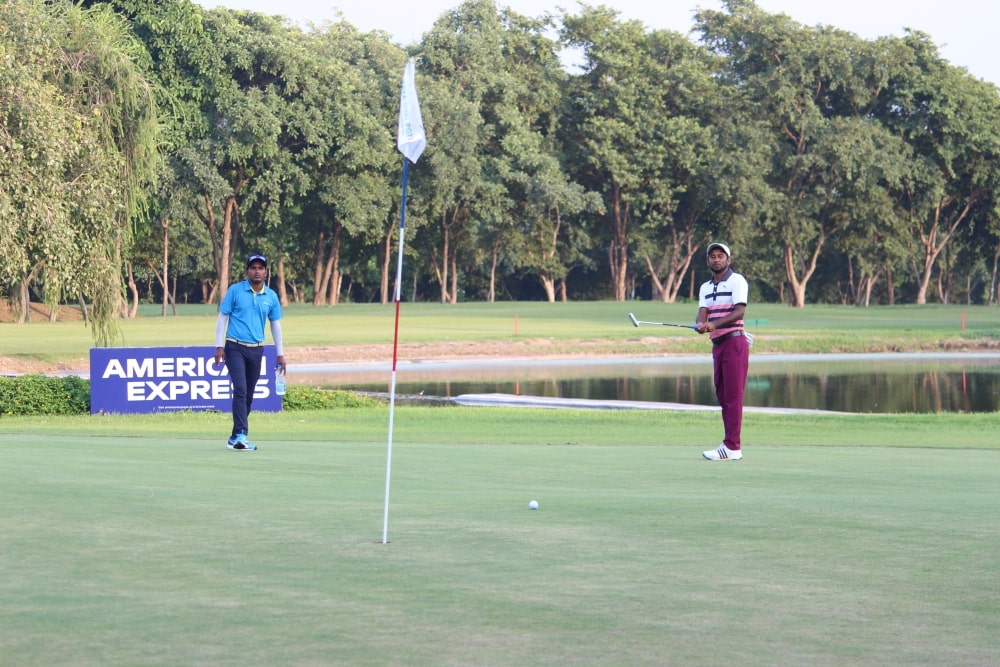 Bangladesh's  Jamal Hossain returned steady 4 under 68   and with an overall score of 11-under 133  maintained his lead after 36 holes at the TATA Steel PGTI Players Championship here Wednesday.

However, the standout performer of the day was Sri Lankan r N Thangaraja whose best round of 8-under 64 catapulted him to the second spot trailing the leader by just one stroke at 10-under 134.  Badal Hossain of Bangladesh was placed third with an overall score of 9-under 135 at the halfway stage.

The cut was declared at 1-under 143. Fifty-two professionals and two amateurs made the cut.

Jamal Hossain’s second round consisted of five birdies and a lone bogey. Continuing with his form from Round 1, Jamal, currently ranked fifth on the PGTI’s merit list, showcased his control over his second shots coupled with his impressive tee shots as he missed just one fairway today. Jamal who carded a 4-under 68 today was tied for first place with N Thangaraja till the very last moment, but a birdie on the 7th hole helped him take the one-stroke lead over the Sri Lankan Golfer.

“My driving and my second shots bailed me out today as I missed a lot of birdie putts in the second round. I am happy to maintain my lead moving into the third round, and my focus will be on playing my best game tomorrow and day after.”  said Jamal

Trailing the leader by a shot was N Thangaraja who jumped 21 spots to be placed second with an overall score of 10-under 134. Thangaraja who teed off from the 10th hole started on a positive note with birdies on the 11th, 13th and 17th holes, but his turnaround happened on his front nine, where barring a bogey on the 8th and two pars on the 2nd and 4th, he birdied every other hole.

Olympian Udayan Mane, three-time PGTI Order of Merit Winner Rashid Khan and defending champion Chikkarangappa S are tied at 40th with an overall score of 1-under 143.

Two of the three Panchkula-based amateurs in the field who made the cut were Brijesh Kumar who was tied 28th at 2-under 142 and Arjun Singh Bhatia who occupied tied 40th at 1-under 143.