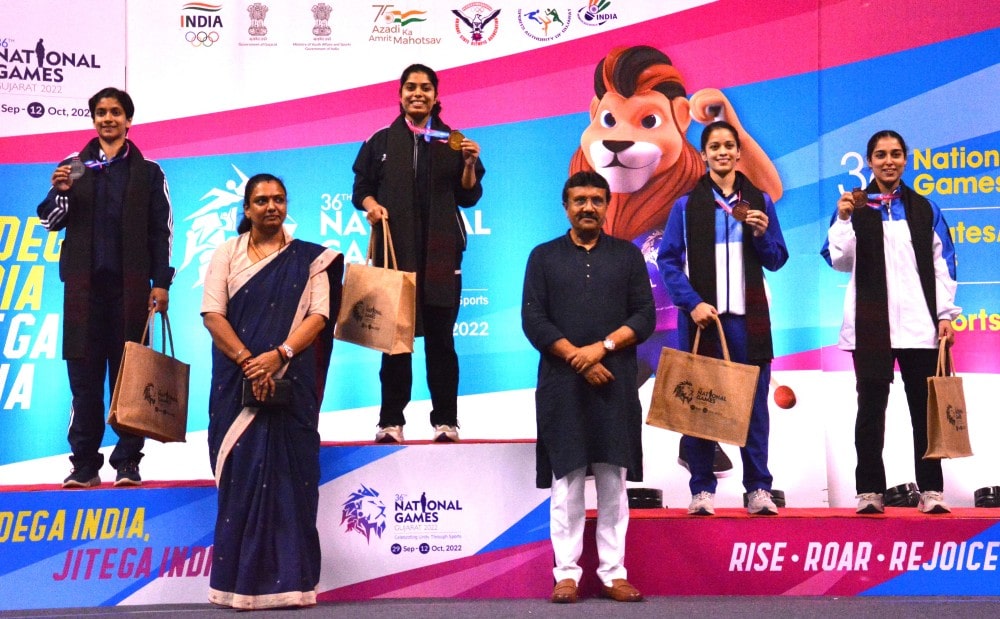 In Rajkot, a Diving gold through Surajit Rajbansi on the 1M Springboard helped Services take their tally of gold to 41 so far. With 26 silver and 25 bronze for a total of 92 medals, the defending champions have stood head and shoulders above all States and UTs.

The fancied N Sikki Reddy and Pullela Gayatri Gopichand expectedly won the Women’s doubles title for Telangana, making it a happy outing for the State with three gold to show from the Badminton competition.

Telangana had more reason to celebrate when their Women’s Basketball team prevented a Tamil Nadu double in Bhavnagar. Telangana beat Tamil Nadu 67-62 in a thriller, after leading 35-31 at half-time.

Coming on the heels of their 3x3 side’s gold, this win meant that Telangana women would complete the golden double in the National Games. The formidable Tamil Nadu Men’s squad beat Punjab 97-89 after holding a 46-42 lead at the break to take the crown.

At the Sardar Patel Swimming Complex in Rajkot, the experienced Surajit Rajbansi and H London Singh earned the top two medals for Services. With good execution of his routines, Surajit Rajbansi tallied 275.35 points, relegating team-mate London Singh who logged 254.75 points. This was the third successive 1-2 for Sevices in Men’s Diving.

“I’m feeling good today. At the recent National Championships in Guwahati, I was not in the best of form and only won silver. I wanted to better my performance and succeeded,” said the 23-year-old who took the help of a mind trained to settle his nerves. It helped as this time he was able to overcome his fears and give off his best.

It was Aakarshi Kashyap’s victory over Malvika Bansod in the final that was the highlight of the morning session. The Chhattisgarh player was quick and meant business with her well-placed strokes that wrong-footed an error-prone Malvika. The Maharashtra star regrouped in the second game but Aakarshi was up to speed.

The 30-year-old Sai Praneeth faced a tough contest against Mithun. “Any gold medal is good for any player. I’m happy I could get my first-ever National Games gold,” the Telangana star said, adding that he was happy with the way he played, staying calm when Mithun gained the upper hand in the second game and riding on his greater endurance to claim gold.

Ashwini Ponnappa and K Sai Prateek made a perfect start to their journey as a mixed doubles pair, eking out a 21-16, 21-13 victory over Rohan Kapoor and Kanika Kanwal (Delhi). Ashwini Ponnappa was all praise for her 22-year-old partner. “He played a strong game. He hit hard and covered the court well. I’m very happy to win my first ever National Games gold,” she said.