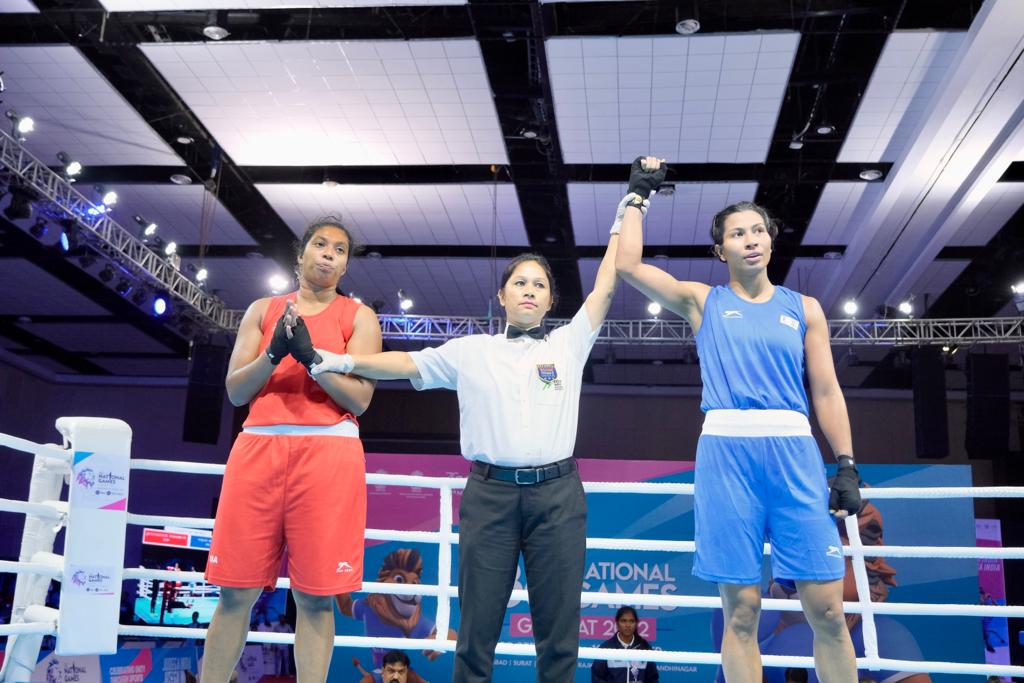 Olympic bronze medallist Lovlina Borgohain and Commonwealth Games medal winners  Mohammed Hussamuddin and Jaismine Lamboria assured themselves of a medal each at the 36th National Games Boxing competition at the Mahatma Mandir here on Sunday.

Gujarat’s Asifali Asgharli Syed and Ruchita Rajput lined up for a podium finish, giving the home crowd much to cheer about.  The referee stopped Ruchita’s contest against Maharastra’s Sanika Sasane who fractured her ankle in the opening round.

Syed got the vociferous home crowd on its feet by recording a comfortable split decision 4-1 win against Jharkhand's Jadov Deogam in the men's 57kg category. He takes on World Youth champion Sachin Siwach (Haryana), who cleared a hurdle against Chhattisgarh’s S Sahil in a bloodied quarterfinal.

Sachin and Sahil both suffered cuts on their foreheads, forcing the referee to end the contest, and award it in favour of the Haryana boxer.

In women’s 60kg division, World championship medalist Simranjit Kaur (Punjab) also made it to the last four stage with a comfortable 5-0 win over Mizoram’s Kroshmangaihsangi. Simranjit will be up against Assam’s Pwilao Basumatary, who registered a stunning win against Himachal Pradesh’s little-known Dimple Upadhyay.

Assam’s Lovlina preferred to spend some time in the ring before registering a commanding 5-0 unanimous verdict win in In women’s 75kg bout against KA Indraja (Kerala). The gap in class was evident even as Lovlina made full use of the opportunity to free her arms and eventually set up a clash with home boxer Ruchita Rajput.

Saweety Boora, a World championship medallist, set up the other 75kg semifinal with Himachal Pradesh’s Shreetima Thakur after getting the better of Delhi’s Shalakha Singh by a 5-0 verdict.

In the 60kg class, Commonwealth Games bronze medallist Jaismine stood out against Uttarakhand’s Lucky Rana. The taller Haryanvi wide range of punches unsettled Lucky and left her searching for cover in what ended as a lop-sided 5-0 unanimous verdict in favour of the 21-year-old Asian championship medallist. Jaismine will next meet Manipur’s Pravish Konthoujam, who won a narrow 3-2 verdict over Maharashtra’s Poonam Kaithwas.

Earlier, National championship silver medallists Ankit Sharma and Minakshi of Haryana registered dominating victories. Ankit was in a league of his own in the men’s 51kg,  as he recorded a commanding 4-1 victory. A gold medallist at the Khelo India Youth Games in Guwahati, Ankit’s technical superiority was too much for Maharashtra’s Ajay Pendor.

Uttar Pradesh’s Rashi Sharma and Uttarakhand’s Shobhja Kohli registered contrasting victories to advance along with the supremely talented Haryana pugilist Minakshi, who is using the National Games to fine-tune her preparation for the Asian Championships in Amman from October 30.