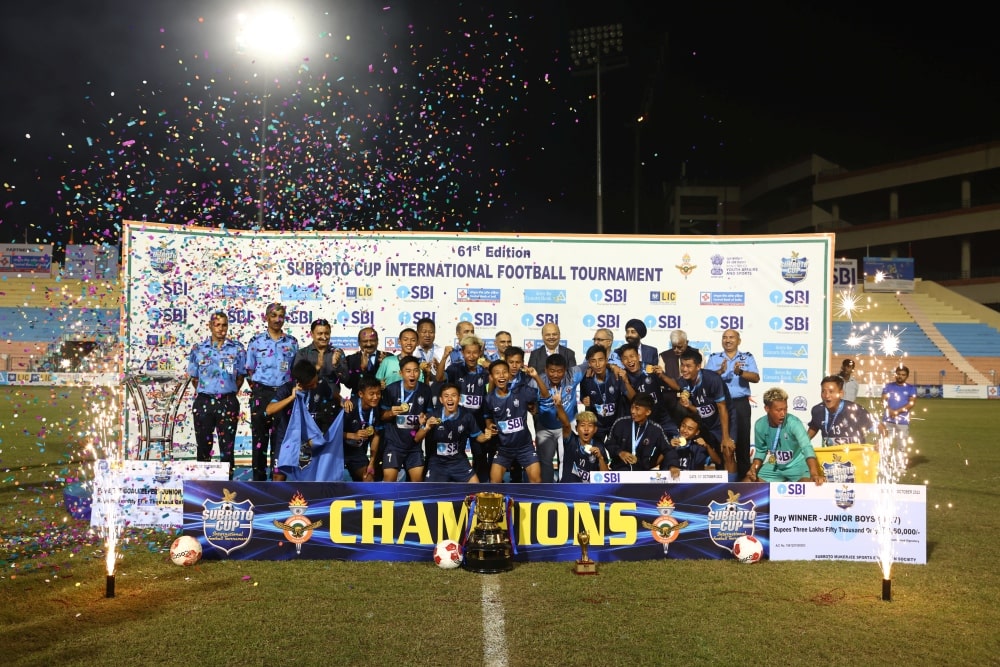 The final of the 61st edition of the Subroto Cup played at Ambedkar stadium here this afternoon was dominated by the Nagaland school but still they had to wait for that goal to lift the trophy.

Nagaland played the more enterprising football. Captain Bapen and Thanglenngam combined together well on the left flank where most of the attacks were created. Chandigarh had the best chance of the half when tournament top scorer Lemmet tested Nagaland goalkeeper Shotok, who saved well to keep the scores even.

The second half was an even affair with both teams not able to create any clear-cut opportunities taking the game to extra time. Nagaland however, looked more compact and organized in attack throughout the game.

The goal came early in the first half of extra time, when off a Tongtinlen corner, Setungchim, who had scored a hat-trick in the semi-finals, rose highest to deflect a header past Rohit in the Chandigarh goal.

The winners received the grand trophy from the Chief Guest, Air Chief Marshal V.R. Chaudhari.  Also, present on the occasion to inspire and cheer on the finalists was Tokyo Olympics silver medalist wrestler Ravi Dahiya, who was the Guest of Honour.

Chief Marshal Chadhari said, “It was heartening to see two fine young teams battle it out so intensely for what is undoubtedly the premiere school football prize in the country. Today’s match once again reiterates that there is no dearth of talent in the country when it comes to football or any other sport. There were no winners today. I congratulate both teams for giving their heart out and playing in a spirit that epitomizes the dream of the founder of this prestigious trophy,

“Sport in itself is a great guru for kids. It imbibes discipline and focus at a very young age. These are values that go a long way in the making of a successful human being. Team sports like football, also teach you to work as a team and teaches you how every member of a team, just like in a family, is important and needs to be valued and respected. "Ravi Dahiya  said