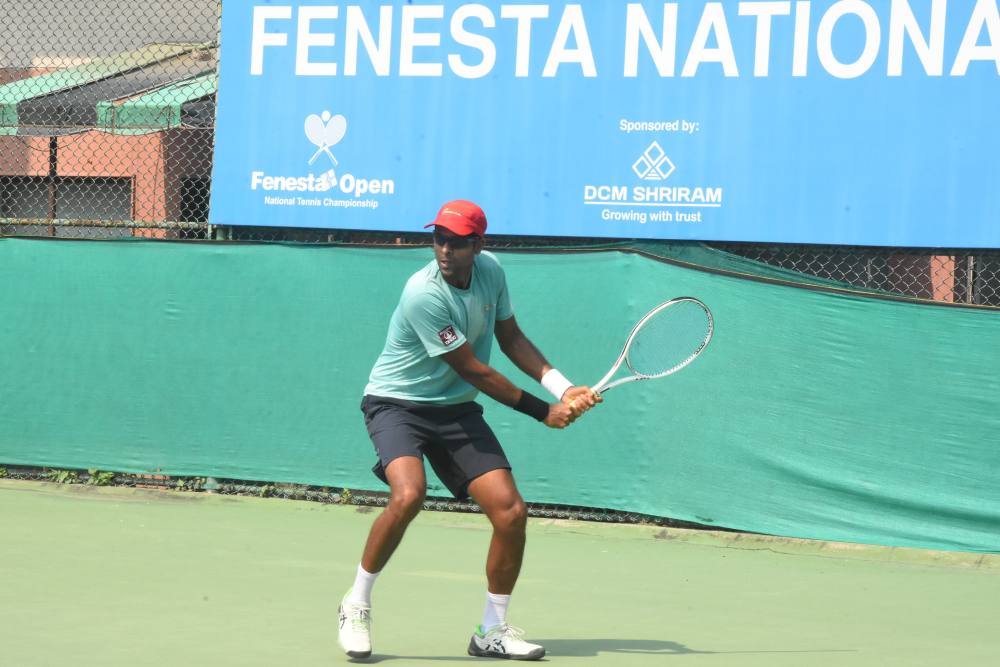 Veteran Vishnu Vardhan turned the clock back and the years as he knocked much younger Prajwal Dev out of the Fenesta Open National Tennis Championship. here on Thursday.

Vishnu upset f Prajwal 6-2, 6-4  in the pre-quarterfinal at the DLTA complex.

The veteran who has been a regular at the Fenesta Open for over two decades showed that he had the strokes and ability to match younger players with his bright brand of tennis.

"It has been over 23 years that I have been coming to Delhi for Fenesta Open. It was earlier called the Shriram Open and I am happy to be here. I am even happier as I have now got into the quarter-finals of the men’s singles event. I am really looking forward to my rest of the week here," said Vishnu.

“Overall, I have played thrice in the Fenesta Open. Today’s match was tough but I did it. I hope my next match will be good," said the young Sahira.

Top seed Vaidehi Chaudhri was put through the wringer as she beat Smriti Bhasin in three sets. Vaidehi had to use her experience and energy to get past Smriti Bhasin 6-4, 4-6, 6-3. Her form may have been up and down but in the decider, Vaidehi played the big points better.

“Today’s match was really good and I played for around two hours. The girl played really well and in the end I won," said Vaidehi.

Top seed Manish Suresh K beat Yash C in a long match scoring 6-3, 7-6(3). “It is an amazing feeling playing at Fenesta Open, which is the biggest tournament in India. It feels really good to be back after 3 or 4 years. Last time was back in 2018 or 2019 and it feels amazing to be back again. I hope I can go a long way. Today was a good match, little close in the end. But I am happy to pull through and hope to go further in the tournament.”

Adding on his win, Digvijay S (Seed 2) said, “Today’s match was a complicated one and I played against Dalwinder Singh. I have played him in the same second round previously. It was a solid match and I feel really good. This is my fourth year of playing at Fenesta. Last year, I even made to the finals. Hence, I am looking forward if I can win the trophy this year.”

Fourth seed Akansha Nitture beat Shimreen Ahamed 6-2, 6-0, in the second round. “I just now won the second round of the Fenesta Open and it feels really great. It was an easy win for me and I am looking forward to the next round," said Akansha.

Second seed Sai Samhita was in rip-roaring form as she beat Riya Ubovja 6-0, 6-2. "Today I played my second round against Riya Obovja. Today I was playing in my best form, I played really well. I played good and aggressive tennis today with rhythm," said Sai Samhita.