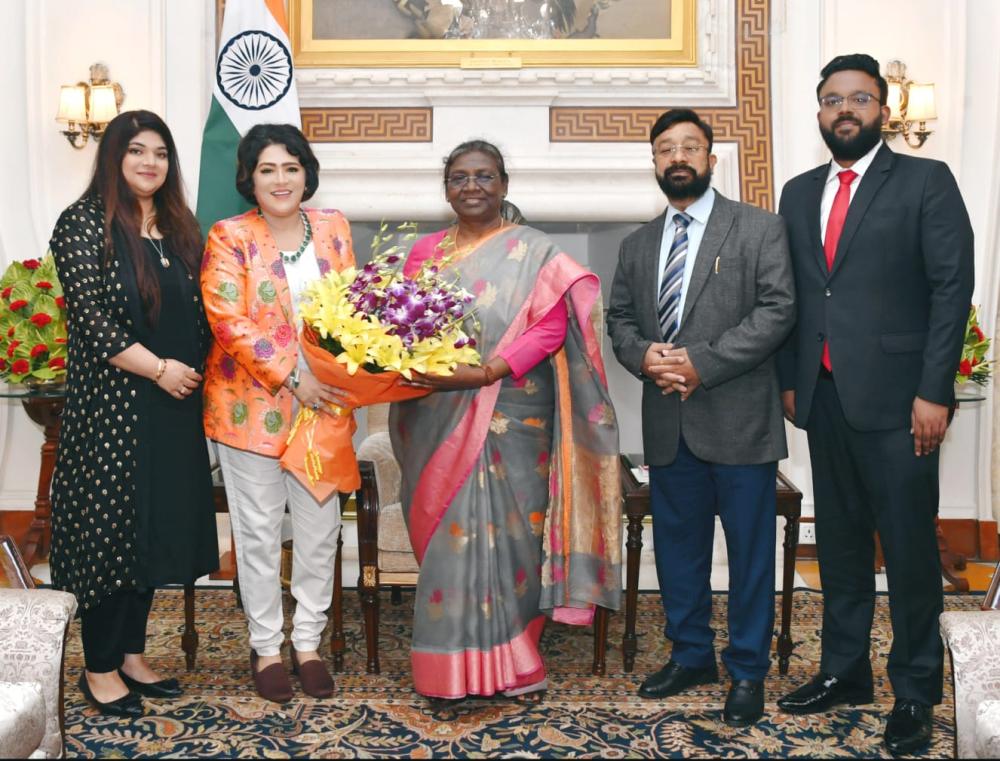 Inside Rashtrapati Bhawan in the national capital, President of India Droupadi Murmu recalled an interaction with eye doctors linked to a women's health camp and Jyot Se Jyot Jalao(Light up one vision from another vision) campaign in Khunti, the homeland of tribal hero Birsa Munda in Jharkhand, while advising four ophthalmologists of a family to continue serving the "poor and the needy".

With an aim to check and diagnose diabetic eye patients, the 'Jyot Se Jyot Jalao' campaign was organised by Dr  Bharti Kashyap for All India Ophthalmologist Society in Khunti in 2017. Following the guidelines of this campaign, a diabetic eye screening camp was held with retina surgeon Dr Bibhuti Kashyap.

"Due to torrential rain, the camp was washed away. Many patients, whose pupils were dilated, had to be moved to a safer location. After the rain subsided, the camp was reorganized. Though pupils who were dilated and whose vision was blurred, began having doubts, if this eye doctor can still examine their eyes. Their doubts were cleared when Dr.Bibhuti Kashyap not only examined them but successfully treated them. When Madam Murmu was apprised of it, she had applauded him. More than five years later now when she was President, Madam recalled the entire event", smiles Dr Bharti Kashyap.

"Keep doing service to the poor and the needy",opthalmologist Dr. Bharti Kashyap, her husband Dr. B P Kashyap, daughter-in-law Dr. Nidhi Gadkar and son Dr. Bibhuti Kashyap, who met her at Rashtrapati Bhawan in New Delhi on October 7, 2022, quoted President Droupadi Murmu having told them.

Also, these eminent eye doctors applauded President Murmu for giving them credit for working to combat blindness in rural as well as urban areas of tribal Jharkhand.

"We frankly like her and feel proud of Madam President Droupadi Murmuji. We also feel honoured that she, despite assuming the highest office of our country, gave appointment to us and appreciated our works and campaigns against blindness as well as cervical and breast cancer, the two commonest killers of women across the world", said Dr Bharti Kashyap.

Keeping official works aside, she said, President Murmu underlined on sticking to the service to the poor and needy."We apprised Madam President,our commitment and the progress we had made in our continued efforts toward the cause of the poorest of the poor",Dr Bharti said.

Notably, Madam Droupadi Murmu had served the State of Jharkhand as Governor for six years(2015-21). As Governor, she herself had actively campaigned to spread awareness on eye donations,and thereby encouraged men and women to donate the eyes of their deceased dear ones. More, walking the extra mile, Madam Murmu had pledged her eyes to these eye doctors who managed and run Kashyap Memorial Eye Bank, Ranchi, in 2016.

As part of her efforts to empower women, Governor turned President Droupadi Murmu is on record taking self-initiative to equip six State-run Sadar Hospitals in Jharkhand. Dr Bharti Khasyap has not forgotten her trip with Madam Murmu to tribal dominated Raj Mahal, Sahebganj and Khunti with the objective to carry forward the Cervical and breast cancer eradication campaign.