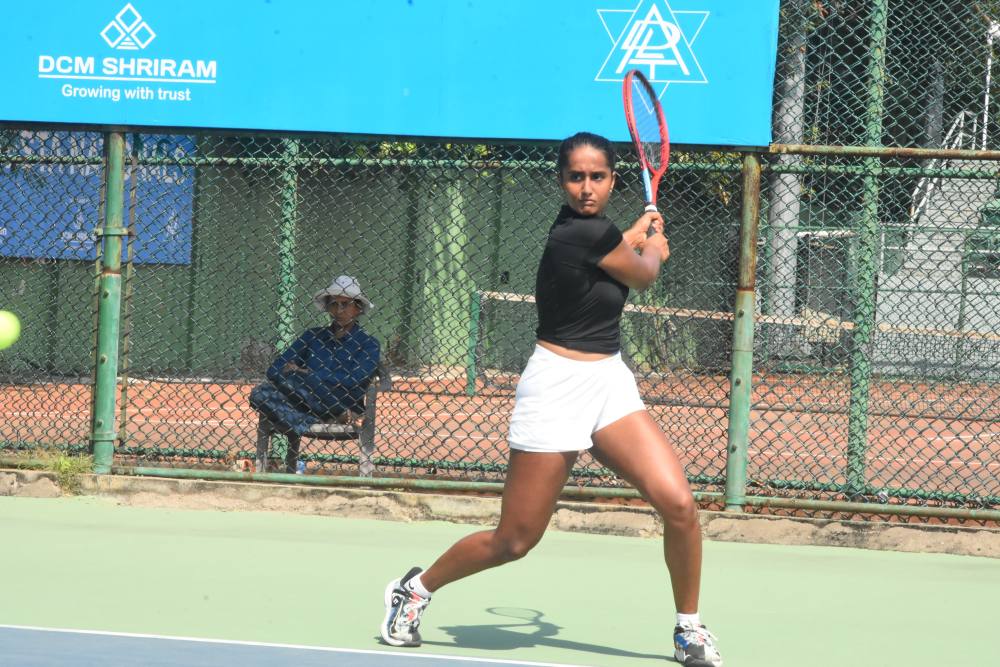 Teenager  Vaishnavi Adkart and veteran Vishnu  Vardhan chalked out contrasting victories over their fancied rivals to storm into the women's and men's semi-finals respectively of the Fenesta Open National Tennis Championship here on Friday.

Riding on her recent form,  Vaishnavi grabbed her chances on the hard courts at the DLTA as she produced the stokes even on a relatively faster surface. If in the first set the Pune girl vi took time to settle down, in the second set she was in sublime form. "I am happy to have advanced to the semi-finals,"  she said after the victory.

Top seed Vaidehi Chaudhari continued with her impressive form as she outlasted Seed 5 Farhat Aleen Qamar 6-1, 6-2.  “Today’s match was really good. I thought it would get close but I played really well. I am in the semi-finals for the third time. I am looking forward to my match on Saturday," said Vaidehi.

Second seed Sai Samhitha got past Sandeepti Singh 6-3, 7-5 in the quarter-finals. “I am feeling great to play the semi-finals. Today’s match was really good. Sandeepti played really well. I had two match points which I couldn’t convert. She gave me a good fight and it feels good to win at the Fenesta Open," said Sai Samhita.

In the men's section, Vishnu Vardhan turned the heat on Siddharth Vishwakarma. In a match that went down to the wire, Experience was a big plus for the veteran who battled it out for over three hours to subdue his determined young rival.

“I am really happy to have made it to the semi-finals at the Fenesta Open this year. I played for three hours and in the end I had to pull out all the tricks. I am now looking forward to the next couple of days at the tournament," said Vishnu.

In the junior section (under-18), Seed 1 player, Suhitha Maruri was in great shape as she beat Hitkamya Narwal 6-1, 6-3. “I just finished my quarter-finals match and am looking forward to the semi-finals. It really feels great to come back. I am hoping to put in my best efforts tomorrow," said Suhitha.

In boys' under-18 quarter-final, Aman Dahiya, Seed 1, rolled over Rethin Pranav 6-4, 6-1. “Today I won my match against Rethin Pranav. I played really well and aggressive. I took my chances. I hope the semi-final will also be good," said Dahiya.