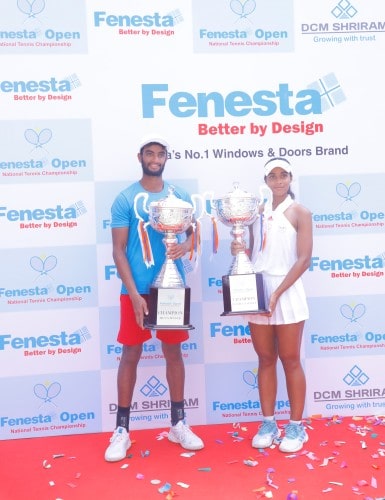 Manish Sureshkumar and Vaidehi Chaudhari chalked out easy victories over their rivals to win the men's and women's singles titles respectively in the Fenesta Open National Tennis Championship here on Sunday.

Both the finals turned out to be one-sided affair as  Manish Suresh Kumar  dismantled the challenge from  Digvijay Pratap Singh 6-2, 6-3   while  in the women's section Vaidehi  scored a comfortable  6-2,6-0 win over Sai Samhitha Chamarthi

Manish Sureshkumar played with purpose and professionalism as he overwhelmed  Digvijay Pratap Singh. “It was a really a great match today. Digvijay is a tough competitor and I am really glad that I got through the match. I think this was one of the best matches of mine in the tournament and I am glad that I could do it. " the Champion said after his victory

"I have been trying two years to win the Nationals and it feels really great to do it this time at Fenesta Open " he said as he was third time lucky.

It was disappointing for Sai Samhitha as she had been in good touch through the last week. The essence in a final is raising the level of play, which Vaidehi did with finesse. Vaidehi has been playing tennis since the age of nine and waiting for the right breaks. Winning the Fenesta Open is a big thrust to her career as she has been hitting around in ITF events to make it big. Apart from the prize  money, there is prestige in winning the Fenesta Open.

Most players who have gone through the grind of playing the premier national tournament have done well. The same could be true for Vaidehi as she is still at a stage where she can make improvement in her game and become better as a professional on the circuit. "This is my first Fenesta Open title and I am very happy," she said.

In the boys' under-18 final, Denim Yadav showed dash and daring as he outlasted Aman Dahiya 7-6 (7/2), 6-4 to win the title. Denim had a tough time in the first set. In the tie-break, Denim was stronger on the big points and pulled of the set. In the second, set, too, Denim put his best foot forward.

“Today’s match was really a hard one. I played against Aman Dahiya, one of my closest friends. The first set was really close. I took the lead in the second set at 4-0 and thereby won the match. I am really elated to win the Fenesta Open this year," said Denim.

In the girls' under-18 final, Madhurima Sawant, the second seed, was bouncing on her feet as she stroked her way past Suhitha Maruri 6-3, 6-2. Madhurima showed a large heart and big game to win hearts at the DLTA.

It has been a good first week at the Fenesta Open even though rain had played spoilsport with the schedule for the first few days. With sunshine now out in full bloom in the Capital, the second week featuring juniors, promises to be equally exciting.