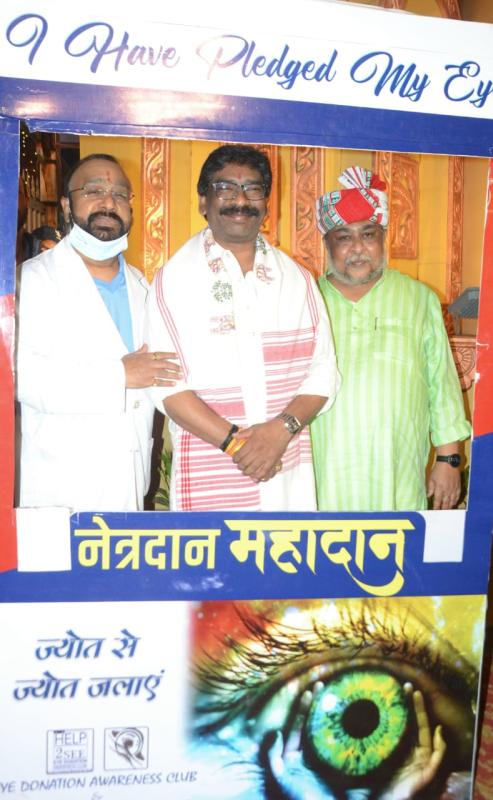 For the first time, the pandal of mother Goddess Kali has been used to generate sentiments among people to opt for eye donation.

The pandal carrying the idol of Goddess Kali with a slogan- Jyot Se Jyot Jalayen( Light Up Vision From Vision)- was designed and put up by Cosmos Club Kali Puja Samiti at Burdwan Compound in association with Kashyap Memorial Eye Bank and Eye Donation Awareness Club at Burdwan Compound, Ranchi. The occasion was the annual festival-Kali Puja.

Not least, the puja committee members, EYEDAC and Kashyap Memorial Eye Bank showcased a selfie point right in front of the idol of the mother Goddess Kali. This not only attracted devotees but also Chief Minister Hemant Soren who visited the Pandal on Wednesday evening.

CM Soren offered prayers before the Goddess Kali, stood at the selfie point, got photographed, and thereby sought to promote the noble cause of eye donation.

As the two-day Kali puja concluded on Thursday, Cosmos Club Kali Puja Committee members said that there was a lot of enthusiasm among the youth and children as most of them were spotted taking photographs at the pandal’s selfie point.

A number of them had also got themselves registered for eye donation. More, the volunteers of Kashyap Memorial Eye Hospital, Ranchi appeared to have felt inspired by those devotees who had pledged to eye donation.

In all,95 devotees of Goddess Kali have filed the affidavit of eye donation. The interior decoration inside the puja pandal was based on a theme of eye donation- Jyot Se Jyot Jalayen(Read-Light up someone’s vision from a dead man’s vision).

When asked, a Cosmos Club Kali Puja Committee member replied that since Kali puja was observed after a gap of two years due to the Covid-19 pandemic, it was decided to celebrate it by exhibiting eye donation as its central theme with an aim to break the taboo associated with organ donation.

In effect, a random survey of Kali devotees revealed that many of them felt encouraged to donate their eyes so that they can light up someone’s life by using the eyes of a dead person.

Dr. B P Kashyap Director of the eye bank was present throughout the event promoting eye donation. When asked Dr. Bharti Kashyap, Medical Director, Kashyap Memorial Eye Bank Ranchi, replied that keeping up the fervour of Kali Puja and Diwali, scores of men and women have signed the eye donation pledge forms. We are proud of them.”