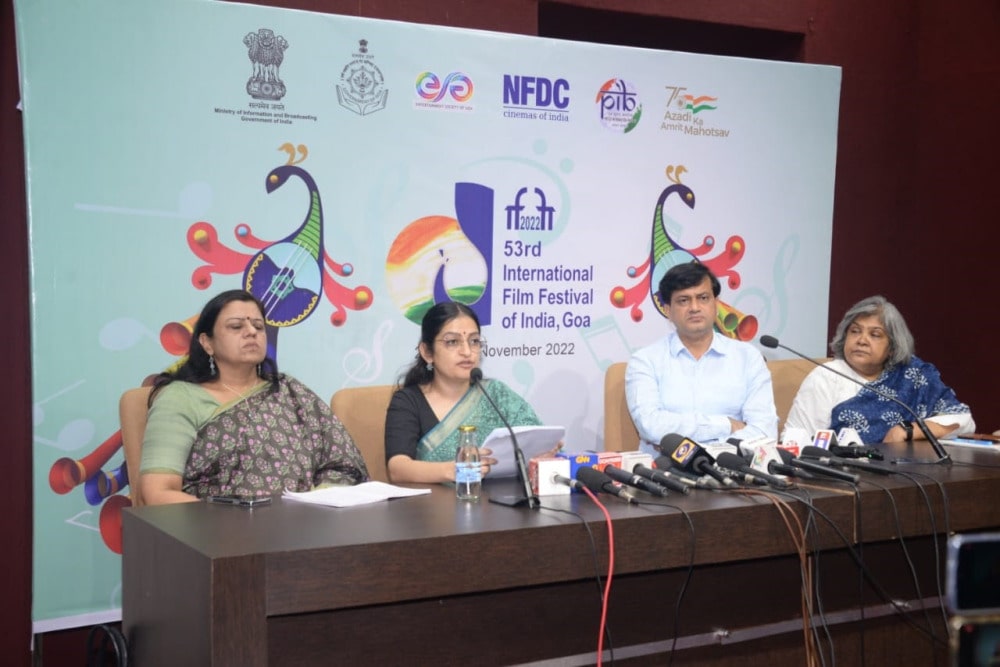 This edition of the festival presents to film delegates a potpourri of 280 films, inviting them to immerse themselves in the lives, aspirations and struggles of peoples from a total of 79 countries.

So, let us cut to the highlights:

The Austrian film, Alma and Oskar, directed by Dieter Berner, will open the festival. Red Carpet for opening film will commence at 2.00 PM at INOX-I, Panjim, followed by the screening of the film.

Polish film Krzysztof Zanussi’s Perfect Number is the closing film. Red Carpet for closing film will commence at INOX-I, Panjim at 2.00 PM on 28thNovember, followed by the screening of the film.

Fixation, a 2022 film set in Germany, Canada and the USA, by Mercedes Bryce Morgan is the mid-fest film.

25 feature films and 19 non-feature films from India will be showcased in the ‘Indian Panorama’ while 183 films will be a part of international programming.

The festival presents a special section for Asha Parekh, the 52nd Dadasaheb Phalke Award winner, with the screening of three films, namely, Teesri Manzil, Do Badan and Kati Patang.

On the occasion of completion of 50 years of Manipuri Cinema, a specially curated package of five Feature and five Non-Feature films, curated by Manipur State Films Film Development Society, is being screened under Indian Panorama.

As an initiative to promote films from North-East India, 5 feature and 5 non-feature films, will mark golden jubilee of Manipuri cinema.

There will be special screenings of Pan Nalin’s Chello Show—The Last Film Show, India’s official entry to the Oscars in the Best Foreign Language category, and Madhur Bhandarkar’s India Lockdown.

Satyajit Ray Lifetime Achievement award is being conferred on Spanish film director Carlos Saura. His daughter Anna Saura will accept the Award on behalf of the eminent filmmaker, at the opening ceremony. A retrospective of his oeuvre is being showcased at the festival.

France is the ‘Spotlight’ country and 8 films will be screened under Country Focus package.

‘Film Bazaar’ will screen some of the finest films and filmmakers in various sections. For the first time, Pavilions will make an appearance at IFFI in line with major international markets like the Marche du Cannes. This year, there will be a total of 42 Pavilions. They will house the film offices of the various state governments, the participating countries, industry players and media units from the ministry. This will also be the first time when many restored classics will be available at  ‘The Viewing Room’ where one would be able to buy the rights of these films and use them at film festivals across the globe.

The festival director informed that a new Book Adaptation Program titled Books to Box Office has been introduced as an initiative to bridge the gap between good stories printed in books and good films that can be made by adapting books. Some of the best publishers are expected to be present to sell the rights of the books that can be turned into on-screen content.

Caravans will be deployed throughout Goa and movies will be screened, as an initiative to reach out to people in the villages as well.

Open air beach screening to also be carried out.

The ‘Homage’ section will include fifteen Indian and five international films.

CBC will organise exhibition on the theme of Azadi Ka Amrit Mahotsav.

There will be several Gala Premieres of Hindi films with their actors present to support and promote cinema. These include Paresh Rawal’s The Storyteller, Ajay Devgn and Tabu’s Drishyam 2, Varun Dhawan and Kriti Sanon’s Bhediya and Yami Gautam’s Lost. The upcoming Telugu film, Raymo, Deepti Naval and Kalki Koechlin’s Goldfish and Randeep Hooda and Ileana D’Cruz’s Tera Kya Hoga Lovely will also be premiered at IFFI, along with an episode of OTT shows like Vadhandhi, Khakee and Fauda Season 4.

The festival director informed that the second edition of ‘75 Creative Minds of Tomorrow’, an initiative by the Ministry of Broadcasting and Information is another attraction. The number of filmmakers being recognized is symbolic of 75 years of Indian Independence.

The closing ceremony will similarly be held at Dr. Shyama Prasad Mukherjee Indoor Stadium, Taleigão, Goa on November 28, 2022. The Gala Red Carpet will begin at 4.00 PM, followed by closing ceremony from 4.45 PM to 7.00 PM.

The CEO, ESG Swetika Sachan informed the media that 7 non feature films are being presented to film delegates in the Goa Section. The seven films are Ardo Dis, Before I Sleep, The White Shirt, Wind Chimes, The White Dream, Goy Swatantryache Homkhan and Nimnya Disak. A jury comprising filmmaker Vinod Ganatra; producer, director and writer Imo Singh; and Producer and actor Pampally Sandeep Kumar have selected the films, from a total of 10 entries.

The CEO spoke of other festival attractions as well, you can check out these details here.

ADG, PIB, Pragya Paliwal Gaur briefed the media about the public communications and media facilitation arrangements which the PIB has planned to execute. The ADG informed that more than 500 journalists have applied for media accreditation and that around 420 applications have been processed. She also said that media delegate card distribution has already commenced. She said that PIB is coming out with photos and multimedia press releases / IFFI Chronicles, in English, Hindi, Urdu and other regional languages of the country, on various facets of the festival. PIB is organizing media conferences or what we are calling IFFI Table Talks between filmmakers and film personalities and the media and festival delegates. These sessions will also be livestreamed on the YouTube channel of PIB India. PIB is also supplementing these with social media communications, to improve public engagement, interest and participation in the festival; for which we are using creative forms of communication such as memes and custom videos as well. PIB will also come out with a festival e-newsletter IFFILOID, an initiative we began with IFFI 52.