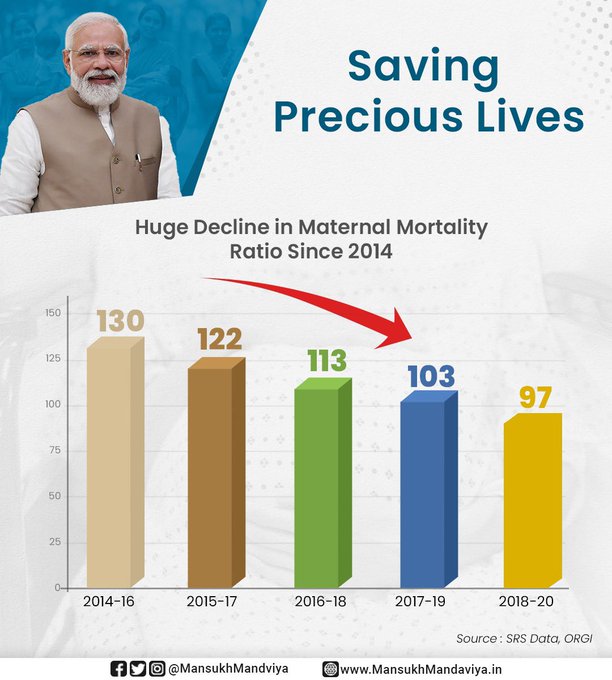 Significant Decline in the Maternal Mortality Ratio from 130 in 2014-16 to 97 per lakh live births in 2018-20. The various healthcare initiatives of PM @NarendraModi Ji’s Govt to ensure quality maternal and reproductive care helped tremendously in bringing down MMR.

Upon achieving this, India has accomplished the National Health Policy (NHP) target for MMR of less than 100/lakh live births and is on the right track to achieve the SDG target of MMR less than 70/ lakh live births by 2030.

The outstanding progress made in terms of the number of states which have achieved the Sustainable Development Goal (SDG)target, the number has now risen from six to eight leading with Kerala (19), followed by Maharashtra (33), then Telangana (43)and Andhra Pradesh (45), subsequently Tamil Nadu (54), Jharkhand (56), Gujarat (57) and lastly Karnataka (69).

Since 2014, under the National Health Mission (NHM), India has made a concerted effort to provide accessible quality maternal and newborn health services and minimize preventable maternal deaths. The National Health Mission has made significant investments to ensure provision of healthcare services, particularly for effective implementation of maternal health programs to accomplish the specified MMR targets. Government schemes such as “Janani Shishu Suraksha Karyakram” and “Janani Suraksha Yojana” have been modified and upgraded to more assured and respectful service delivery initiatives like Surakshit Matritva Aashwasan’ (SUMAN). Pradhan Mantri Surakshit Matritva Abhiyan (PMSMA) is particularly lauded for its focus on identifying high-risk pregnancies and facilitating their appropriate management. This had a significant impact on mitigating preventable mortality.LaQshya and Midwifery initiatives concentrate on promoting quality care in a respectful and dignified manner ensuring choice of birthing to all pregnant women.

India’s outstanding efforts in successfully lowering the MMR ratio provides an optimistic outlook on attaining SDG target of MMR less than 70 much before the stipulated time of 2030 and becoming known as a nation that provides respectful maternal care.