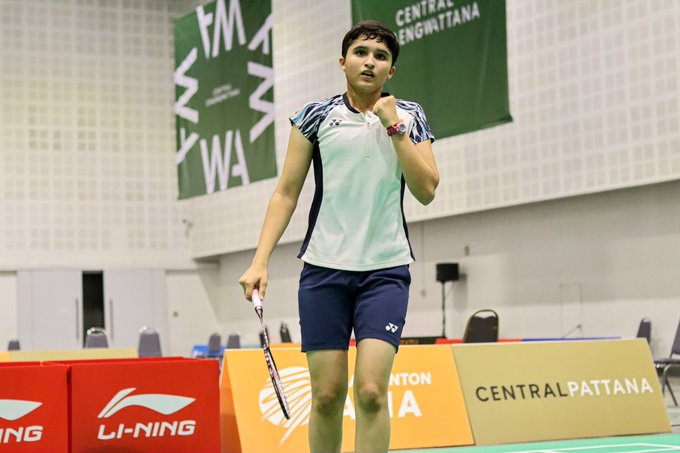 *India's Unnati Hooda celebrates a point during the U-17 women's singles semi-final at the Badminton Asia Junior Championships in Nonthaburi, Thailand on Saturday. (Credit - Badminton Association of Thailand)

Unnati becomes the first Indian to enter the U-17 girl's singles final after thrashing Japan's Mion Yokouchi 21-8, 21-17. She lived up to the expectations and stamped her authority as she wrapped up the match in straight sets.  The Odisha Open champion has not yet dropped a set in her campaign at the prestigious event.

Unnati will now take on Sarunrak Vitidsarn of Thailand in the gold medal match.

Previously,  boys doubles pairs of Arjun MR-Chirag Shetty (2013) and Krishna Prasad Garaga-Satwiksairaj Rankireddy (2015) have won gold medals for India in the U-17 category at the tournament.

With this defeat, Dattu signed off with bronze medals along with the U-15 boys doubles pair of Bjorn Jaison and Aathish Sreenivas PV, whose impressive run was cut short by the top-seeded Indonesian pair of Muhammad Mubarrok and Raihan Pramono with a 18-21, 14-21 win.

In 2013, Siril Verma had won gold medal in the boys  U-15 singles while Samiya Farooqui and Tasnim Mir clinched U-15  girls singles titles in 2017 and 2019 respectively.

The in-form duo of Arsh and Sanskar also showcased a similar dominating display against Chinese Taipei’s Chi-Ruei Chiu and Shao Hua Chiu to ease into the U-17 boys doubles final with a commanding 21-15, 21-19 win in the lopsided Last-4 contest.

They will now face another Chinese Taipei opponent, Lai Po Yu and Yi-Hao Lin, in the final.

"It's a great achievement for a youngster. Unnati has proved her top-seeding with dominating displays throughout the tournament. I congratulate her on becoming the first Indian to enter the U-17 singles final at this prestigious tournament. And I also congratulate Anish, Arsh and Sanskar for entering the finals and also other Indians who secured bronze medals. This tournament is a great platform for young shuttlers and Unnati and our other shuttlers have showcased their talent with impressive performances," said Sanjay Mishra, General Secretary of the Badminton Association of India.

Finals will be played on Sunday.