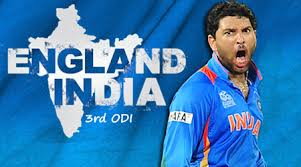 “It’s excellent! Wonderful,” Cricketer-turned-commentator Sanjay Manjrekar told this writer when asked how he felt about the crowd in the stadium.

“Mood in Jharkhand is a lot different now,” says a cricket buff, Rohan Pathak, reflecting on how life post-ODI for many people has changed since the creation of Jharkhand, perennially embroiled in political turmoil with parochial and communal politicians striding across the nascent state.

“A lot of different to the way it was before the ODI,” says Pathak as he was seen comforting the accompanied young sports fans tugging his sleeves to hasten him to have a look at the buses carrying cricketers of India and England after the home team carved out a facile win against the British in the 3rd One Day International at the JSCA Stadium in Ranchi.

And the general mood of the nearly 40,000 enthusiastic crowd was brilliant.There was no room to think about the sick brains in the political system that forced them to witness eight governments and three spells of President’s rule in only 12 years.

“January 19! What a day for the people of Jharkhand, who showed the world that they are not like their politicians. In fact, the fans egged on the Indian cricketers to excel, yet applauded whenever the opponents executed good shots, bowled better length deliveries and an acrobatic fielding,” observes a class XI student Seema.

Captain Mahendra Singh Dhoni strode like a colossus in the stadium jammed to its capacity as he hit the winning runs and gave India a 2-1 morale-boosting win over England, after the Poms thrashed the hosts in the Test series, which preceded the ODI series.

Dhoni, the boy next door, quietly embodies two things; the face of Jharkhand and the honour of the nation, and his home crowd lived up to both with grace, dignity and enthusiasm; notwithstanding food, water and tea sold at exorbitant prices at the galleries amidst spiralling price graph.

“We did not mind to exhaust our pocket money for this month, for ODIs don’t come every month,” shared a giggling Reva, who studies in class IV in “Dhoni Land”.

The traffic flow was fantastic, the police were admirably supportive as evidenced when a policeman was able to convince a youth for his sly remark against a lady, who at the suggestion of the police, made a separate queue for ladies only.

“Look, is it proper to see a woman squeezed herself in the gents’ queue?” asked the policeman to the youth who had erred in passing the indecent remark. But the offender mended at once by agreeing to when the policeman said he himself had advised the lady to make a separate queue.

“The best part of the ODI was that a great volume of positive energy has been instilled in the people, who have nothing to see but the game of musical chairs, a sport excelled by politicians,” sayings an elderly citizen, Soumyajit.

As usual, the fans reserved their best cheers to Dhoni everywhere, riding bikes in the streets or eating burgers at shops or just patiently standing near his Harmu residence—–some calling his name loudly, some quietly and yet others excitedly.

Roman Emperor Julius Caesar would not mind to pass on his 47 BC eternal words—-Veni, Vidi, Vici (I came, I saw and I conquered) to the Ranchi Emperor, Mahi, who became one of the rarest captains to lead the nation in his home town.