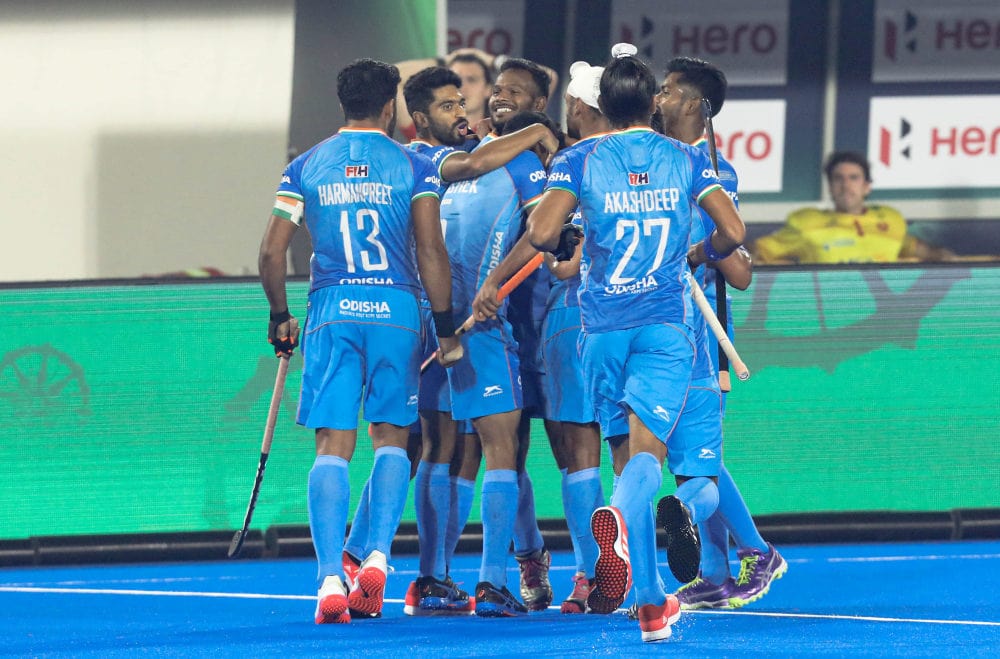 Title aspirant India  commenced their campaign on a victorious note as they overpowered Spain 2-0, while England ran over debutant Wales 5-0 in the Group D matches on the opening day of the Hockey World Cup at the Birsa Munda stadium here last evening.

Amit Rohidas and Hardik Singh scored a goal each to enable India start the tournament with three points Playing in front of a boisterous partisan crowd India started cautiously as Spain gained ball possession in the beginning but soon the men in blue came into the game and it became midfield battle.

In the 12th minute India launched a a very incisive attack  which earned them back-to-back PCs. First it was Hardik Singh whose long scoop beat the Spanish and Shamsher intercepted it inside the circle. He did well to find Spanish defender's foot to fetch India their first PC. But the chance went begging as Jarmanpreet's flick went wide.

Only minutes later, Nilam Sanjeep Xess earned the hosts  another penalty corner . This time, although Harmanpreet Singh's drag flick was blocked away by the first wave of Spanish rushers, Amit Rohidas picked up a fine rebound and slapped the ball away to the top of the post. (1-0) This also happened to be India's 200th goal at a World Cup.

In the second quarter India created several goal scoring opportunities but they could not convert them till almost the end of the second quarter to beat the spirited Spanish defenders. In the thick of action was Hardik Singh, who dribbled past the 25m mark, driving into the circle looking for striker Lalit Upadhyay to set up a goal. Cunill Pau who attempted to stop Hardik's pass happened to get a touch on the ball which deflected into the goal.

In the meantime, Krishan Pathak who alternated in the post after Sreejesh cleared Spain's attempts in the first quarter, was impressive in his efforts as he saved a PC - keeping a clean slate for India.

Comfortably leading 2-0 at half-time, India didn't slow down their pace but instead they upped the ante in their attack and only minutes into the third quarter, Akashdeep Singh helped India win a penalty stroke. But unfortunately for the home team, Harmanpreet's strike was stopped on the line by Spain's goalie Adrian Rafi.

India won a few more PCs in the following minutes but could not convert them but they did well to hold on to the lead with all their might, superbly saved a couple of PCs earned by Spain and marched into their second group stage game on Sunday with three points in their kitty.

Earlier England opened their campaign with a dominating 5-0 win over debutants Wales.  For the winners Liam Ansell scored two penalty corners ,Nice Park, Phil Roper and Nick Bandurak chipped with a goal each.

England were off to a electrifying start as they took the lead in the 35 seconds with Nice Park scoring a stunner (1-0) leaving Wales defenders bewildered. After that Wales crowded their defence  virtually abandoning the midfield for their rivals.

Though English forward line clearly dictated the proceedings they failed to convert the chances convert many a half chances they converted , However they kept up the pressure and forced string of penalty corners just before the half time and the pressure proved too much for Wales as Liam Ansell eventually converted one to increase the lead (2-0).

The third quarter totally belonged to England and they virtually sealed the match in their favour with brilliant strikes by Ansell and Roper . Ansell intercepted the ball from Rupert Shipperley's stick from a penalty corner before slotting it home giving goalkeeper Toby Reynolds-Cotterill no chance to block it. (3-0)

Roper then produced the goal of the game with a stunning reverse stick effort from the very edge of the circle, judged to be just inside by the video umpire.(4-0) England  had a chance to increase the lead when they earned a stroke but Zach Wallace failed to convert .But Nick Bandurak sealed the win with a late fifth goal.

Wales produced their best form - and best chances - in the final quarter. But Jack Pritchard narrowly failed to connect with Ben Francis' flick towards the back post.