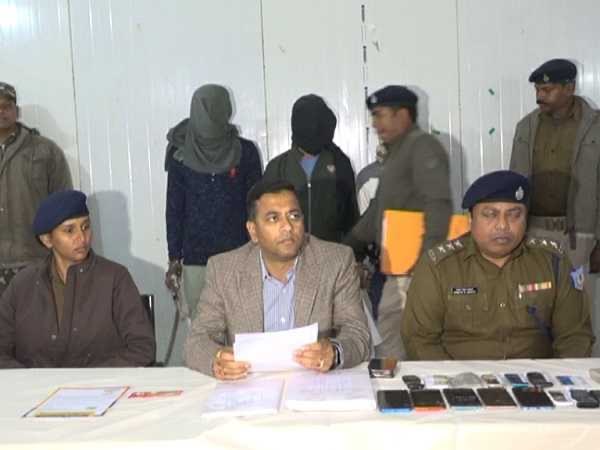 *Ranchi SSP Kishore Kaushal addressing media persons with his colleagues as arrested cyber fraudsters stand behind them in Ranchi on January 15, 2023.

By arresting three cyber criminals, cops led by Senior Superintendent of Police Kishore Kaushal have exposed a gang of cyber criminals who defrauded people by prompting them to shop online.

These cyber criminals who were identified as Karan Kumar, Chandan Kumar, and Sudama Kumar were arrested and 12 mobile phones,484 envelopes of a body call naptol.com, and 6 ATM Cards were recovered from their possession in areas of their operation in Ranchi.

Investigation revealed that cyber criminals were trained for over two months in the capital city of Jharkhand by two of their colleagues from Andhra Pradesh.

Once trained, they used the postal department to send a piece of paper ( read coupon) which the recipient was asked to gain a prize by buying goods online at a lower price.

In response, when the recipient approached the site for online shopping of the prized product, the cybercriminals gained their OTP and withdrew money from his bank. This modus operandi proved successful in 150 persons who were duped and around Rs two lakh withdrawn from their bank accounts.

Apart from Ranchi and its adjoining areas in Jharkhand, a gang of cyber criminals defrauded many people belonging to other states through their online shopping techniques.

Ranchi SSP Kishore Kaushal who addressed press persons on Sunday said these cyber thugs who were members of a big gang were arrested on a tip-off. A team led by Dy.SP Yashodhara was set up.

“After an in-depth probe, they were hooked up’, said SSP.