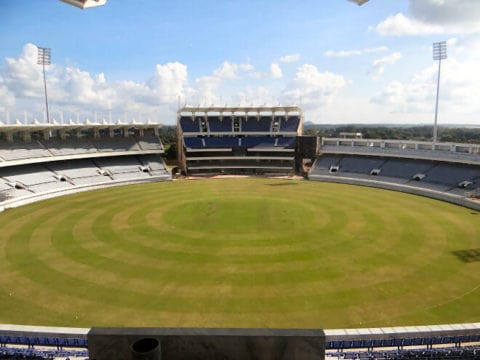 First of three T20 series between India and New Zealand will be played at Jharkhand State Cricket Association’s International stadium in Ranchi on January 27.

Tickets have been fast selling out with fans going crazy to catch a glimpse of their favourite stars in action.

Fans can purchase a maximum of 4 tickets of single or assorted categories. Online tickets are for only home delivery. The stadium is located just 7 KM away from Birsa Munda airport and the railway station is just 10 KM away from the Ranchi cricket ground.

After both team players land at Birsa Munda airport today at 1 pm today, they will get checked in at the Radisson hotel and rest there on Wednesday.

On January 26, when the nation will celebrate the 74th Republic Day, India and New Zealand team players will take part separately in the practice sessions at JSCA international stadium.

The stadium complex was decked up afresh for the top game slated to begin at 7 pm on Friday.

The next two T20 will be held in Lucknow and Ahmedabad on January 29 and February 1, 2023 respectively.