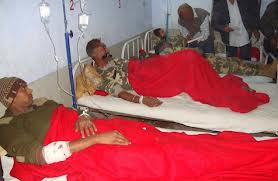 Eleven CRPF jawans were injured in a serial land mine blast trigerred by the CPI(Maoist) in Jhumra hill forest near Kailujara village in Bokaro district on Sunday evening.

Among them the condition of the first three-Kumars and Ram- was said to be critical.”They were under observation at ICU”,said a senior doctor of Apollo.

These CRPF jawans belonging to 26 Batallion were on a long range patrolling.They were stepping down from the Jhumra hill when the Maoists exploded the mines targeting them.”There were four blasts,one after another”,recalls Oraon.

All of them had received injuries caused by splinters of the land mines.

These jawans say they were taken aback by the sudden blast in the evening.”After the blasts,we retaliated and opened indiscriminate firing .But there was no firing from the Maoists”.said Oraon.