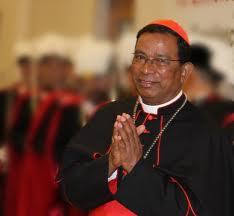 For the first time,two brothers were made priests by the Cardinal Telesphore Toppo.

The priesthood was awarded to Basant Kispotta and his own brother Sunil Kispotta inside the Raman Cathlic Church in Mandar block in Ranchi district on Sunday.

This is the first instance in the history of the Roman Catholic Church that two brothers were made priests,said Cardinal Toppo.

“Priesthood is the biggest honour from the God bestowed on a man.Not every body is fortunate to get it.Every priest was called mysteriously to run the blood in the crucified body of the God Jesus Christ’,said Cardinal Toppo.

The event was witnessed by many senior Catholics including Romis Xhalko,Father Rajendra Xhes,Lorence Dungdung and Father Theodore Basant.