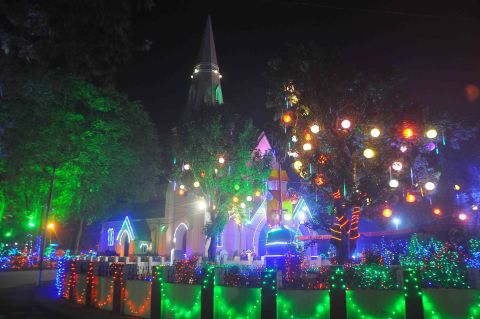 On the eve of Merry Christmas,Church premises wore a festive look.The Christian community belonging to both Catholic and Protestant familes visited Churches where walls and buildings were light up.

“There is nothing lovelier, divine and more Christmassy than sitting in a candlelit church waiting for the whole seasonal panoply of the cathedral to swing you back into history”,said Cardinol Telesphore Toppo of the Catholic Church,Jharkhand.

Churches across Ranchi and its adjoining areas in Jharkhand were illuminated by flickering lights and echo to familiar carols have already started to reverberate inside the majestic cathedrals to usher in the yuletide.

The chapels in the city are already decked up with fairy lights and models of Santa Claus and Christmas trees.

They say Christmas in Ranchi, which was once the capital of the summer capital of Bihar, is celebrated on its streets. But visiting the churches, some of which date back to more than two and a half centuries, is top on the list.