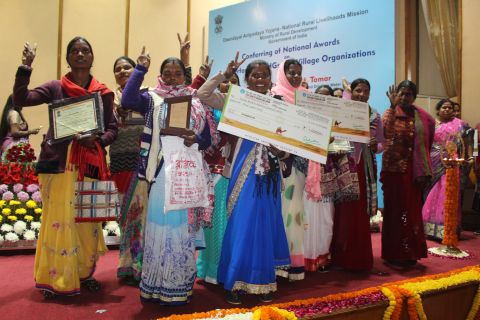 Jharkhand Sakhi Mandal and activists(Diodis) have gained national award for best performance.The award was given in New Delhi by Union Ministry of Rural Development.

“It is a matter for great pride for all persons in Jharkhand”,smiles Principal Secretary(Rural Development)N.N.Sinha.

Among the winners : one Sakhi Mandal and a Village Organization. Across the country 30 Sakhi Mandals and 10 Village organizations were received award. JSLPS wishes all the best to winner Vo and SHG OF Jharkhand for the milestone they achieved. Its a moment of proud for Jharkhand and didis of Sakhi Mandals.

The move is part of the Ministry’s bid to revamp village economy by bringing women into mainstream economic activities.The Centre plans to take more steps to promote products of women self-help groups across the country.

“The Centre is learnt to be taking steps for effective and decentralised marketing of SHG products in the country,” Union Rural Development Minister Narendra Singh Tomar said while addressing representatives of SHGs from across the County on the occasion of National award ceremony for best performing SHGs.