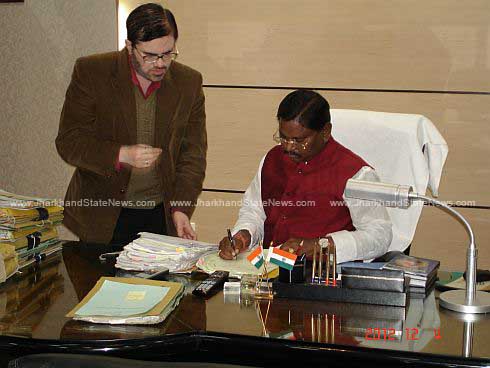 Jharkhand is facing a piquant situation.

The state is under the President’s Rule.Arjun Munda had tendered his resignation as chief minister on Saturday.But his Advisor RC Sinha refuses to resign.

Sinha, a retired Indian Administrative Service (IAS) officer from Maharashtra,who was learnt to be patronized by BJP president Nitin Gadkari,was today asked to resign.But he reportedly argued that since he was appointed for a term,he can not resign mid way.

However,efforts were on to make him understand that since the term was linked with the CM Munda who had already quit,he too must resign.But he refused to do so and told the Chief Secretary S K Choudhary that he did not buy his logic.

Both Choudhary and Sinha were not available for comment.In their absence,a senior IAS officer said:”In case he does not,we will have to dismiss him.”

Incidentally,Sinha had hit the headlines the other day for spending more than Rs 6 lac on his food,lodge and travelling.After the state finance department refused to clear the bills,he gave a written undertaking that he had spent the amount and thereafter the bills were approved and Sinha encashed the money.