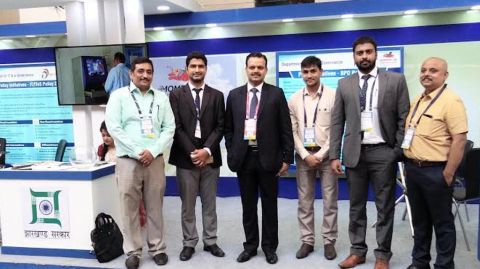 Pictures shows Sunil Kumar Barnwal(Third from Right), Secretary to Chief Minister and Secretary IT and e-Governance, Industries Mines and Geology,who addressed Calcutta chapter of INFOCOMâ€™s IT connectivity event in Kolkata on Saturday.

City of Joy witnessed the Calcutta chapter of INFOCOM organising IT connectivity event, an ABP initiative.It was held year across key cities in India.

The event spanned across three days making it one of the active platforms for IT/ITeS industry to network.

Department of IT & e-Governance along with Jharkhand Agency for Promotion of Information Technology (JAPIT) and Jharkhand Space Application Centre (JSAC) participated in the event as apartner State and setup an exclusive exhibition for the department and Momentum Jharkhand as a run up for the marquee Global Investors Summit to be held on 16th& 17th February in 2017.

In this event had an exclusive keynote speech given by Sunil Kumar Barnwal, Secretary to Chief Minister and Secretary IT and e-Governance, Industries Mines and Geology.

Barnwal started the presentation with the thought that how the State has recently progressed with dynamic leadership and progressive policies. He spoke on the current investment climate with State’s competitive nature in Ease of Doing Business, cost of doing business and abundant resources.

Barnwal also emphasized on the key initiatives taken up by Department of IT. “With initiatives like e-office, Chief Minister’s dashboard and BhartNet etc. the State has come a long way”, Barnwal said. He also highlighted fiscal, non-fiscal incentives, key interventions and differentiators from the newly released policies on IT/ITeS, BPO, ESDM and Start-ups.

With just over two months left for State’s maiden Global Investors Summit in February, Mr. Barnwal invited the delegates, audience and members across industries to make it a successful one.

During this event a large no of companies and individuals have registered for GlS 2017. Registrations for the Global Investors Summit are open and the same can be done on – momentumjharkhand.com.