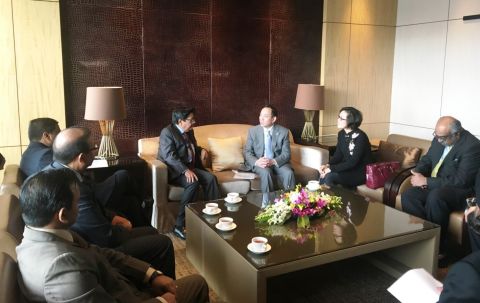 Picture shows a glimpse of the meeting held by the delegates in Shanghai on their concluding day of two day visit to China.

The delegation showcasing huge investment opportunities in Jharkhand, witnessed participation in its road show held at Shanghai.Many Chinese investors and companies look towards India, underlining the growing ties between two of the world’s fastest growing economies,said a press release issued by the delegaion.

The delegation led by Srivastava of Jharkhand,aiming to come up as one of India’s most investor friendly state with huge thrust on Infrastructure,highlighted upcoming mega projects and big-ticket investment opportunities.

The delegation has visited China as part of the state government’s ongoing campaign to mobilise investors under campaign caption ‘Momentum Jharkhand’.It held business interactions with Shanghai-based large corporate groups with interest in infrastructure, technology, construction, mining, heavy engineering and machinery, among others.

The delegation also met Yang Jiarong, Chairman of China Council for Promotion of International Trade (CCPIT), Shanghai the Government agency responsible for promotion of investment and business, to promote partnership between China and Jharkhand. Mr Jiarong affirmed that CCPIT will certainly extend their full support in acquainting Chinese companies about the opportunities of investing in Jharkhand.

In the changing economic scenario, Jharkhand with its excellent infrastructure and connectivity provides a great alternative to Chinese companies looking at reducing cost with an easy access to ASEAN and Eastern Asian countries.

Momentum Jharkhand delegation concluded their trip to China and expressed a deep sense of satisfaction and gratitude towards the investor community, Consulate General of India, and CCPIT for their support and commitment for realizing the objectives of the investment road shows in China.