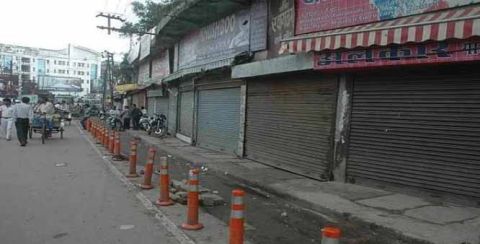 The state wide bandh called by tribal bodies failed to evoke positive response from among the people as traffic remained almost normal and some shops places remained open in Ranchi and its adjoining areas in Jharkhand.

Starngely,the bandh callers were not spotted in the state capital-Ranchi.”We were not allowed to move out to impose bandh”,said a student of Ranchi University.

Security forces were deployed in strength outside the tribal students’ hostels in Ranchi, Dumka as well as other parts of the state.They were keeping watch on the movement of students.
.
The Jharkhand Adivasi Morcha (JAM) and other tribal organisations had called for the shutdown to protest against adoption of amendment in the two state land acts — Chhotanagur Tenancy Act (CNT) and Santhal Pargana Tenancy (SPT) Act by the Raghubar Das government inside Jharkhand Assembly on November 23.

The Congress, Left parties as well as the Jharkhand Vikas Morcha-Prajatantrik (JVM-P) have extended their support to the shutdown.

In other tribal dominated areas of Lohardaga,Khunti,the bandh had affected normal life,said the report reaching Ranchi.

In Lohardaga,trees were cut and used as road barricades at some places. Schools and shops have been closed, and long-route buses did not ply causing untold miseries to people in several parts of the state.