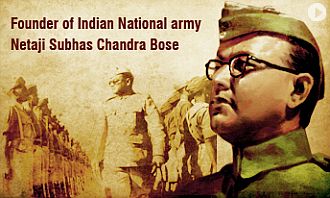 His two letters in possession of Lokmanya Tilak museum in Kesariwada, Pune,show Subhash Chandra Bose,whose 116th birth anniversary was being celebrated across the country today, had a desire to learn Marathi.

This fact was brought into light by the Indian Express story authored by Prasad Joshi.The story says:

“In 1936, when he was lodged in Yerawada Jail in Pune from April 13 to May 16, Bose, popularly known as Netaji, had expressed his wish to learn Marathi and had sought material from the then editor of Kesari, DV Divekar. His wish to learn Marathi, however, was cut short when the then British rulers who incarcerated him shifted him to Darjeeling Jail.”

The same story quotes Bose’s letter requesting the editor to arrange some Anglo-Marathi books to learn the regional language during his confinement as a political prisoner.“I would like to pick up a little Marathi while I am here. I have tried but have failed to get a bilingual book for beginners..,”wrote Bose in a letter to Divekar,according to the story.

“One letter dated April 27, 1936, also reveals Bose’s desire to get his interview published in Kesari, a daily founded in 1881 by freedom fighter Bal Gangadhar Tilak.”

The letter,according to Joshi’s story,says: “I do not know if the (jail) authorities would allow you or any other friends to interview me. The best course would be to apply to the superintendent and see what reply you ultimately get from the government…”

“Deepak Tilak, the great-grandson of Lokmanya Tilak and a trustee of Kesari Mahratta Trust, said Bose and Tilak could never meet but Netaji had high regard for his great-grandfather and his associates. “It was out of pure trust and regard Bose is believed to have written letters to the then Kesari editor,” he told the Indian Express on Tuesday.

“Bose, at the end of his three-page letter to Divekar says, “I am afraid it is beyond your power to make my life in Yerawada comfortable. But I am sure that your kindly thoughts can do more in this direction than earthly convenience…”

“Publications on research into Maratha history, particularly on the causes of downfall of Maratha power in India, and books dealing with land revenue system in India were other books Bose had sought from Divekar, apparently unaware he was to be shifted to Darjeeling.”

“Yet another letter by Bose to Divekar written before his incarceration at Yerawada Jail, dated March 1933, is too yellowed to read clearly. The four-page finds a mention of Bose’s courtesy acknowledgement of a parcel of fruits he had received from his friends in Pune.

The Tilak Museum managed by Kesari Maratha Trust and the Tilak family, also has a photocopy of correspondence between Bose and Tilak’s follower VG Bhat, among other treasures.”