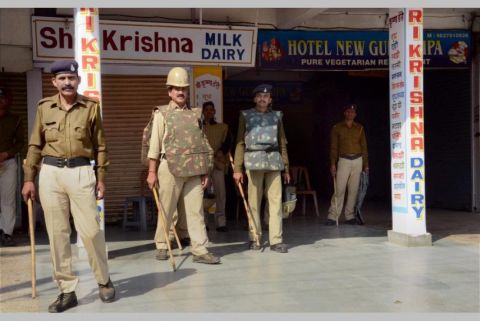 The Opposition parties including Jharkhand Mukti Morcha have called for Jharkhand bandh on Friday against the CNT & SPT Act Amendment Bill 2016 that was passed in Jharkhand Assembly’s ongoing winter session on Wednesday.

This evening supporters of these opposition parties took out torch light procession in Main road.These agitationists were carrying torch lights indicating Land Act amendment agitation has started.Tension was palpable in the city and its adjoining areas in Jharkhand on Thursday.

In response,the state police have been deployed in strength.The Section 144 was proclaimed in all cities and towns across Jharkhand where tension prevailed though no untoward incident took place on the eve of the bandh.

The bandh was backed by JVM-P president Babulal Marandi,Congress state president Sukhdeo Bhagat and RJD president Gautam Sagar Rana.Even leader of opposition Hemant Soren was actively backing it saying “the agitation is just the begining.It will bring the state to stand still on Friday”.

All market places,transport services,schools and colleges are expected to remain closed.The agitationists said that the ruling NDA combine of BJP and AJSU-P had “crossed the Laxman Rekha” and labelled the passing of the bill as “unconstitutional”.

“This day will go down as the darkest day of Jharkhand’s history. The government crossed the Laxman Rekha and tampered with the rights of adivasis and moolvasis without any discussion. Despite being in majority, the government used force to pass the bill unconstitutionally,” Soren said.

“The government’s efforts to fiddle with the interests of the people will be replied with a state wide bandh on November 25 that will be joined by JVM-P, Congress, RJD, JDU and the Left parties. We appeal the social forums to come with us,” he said.