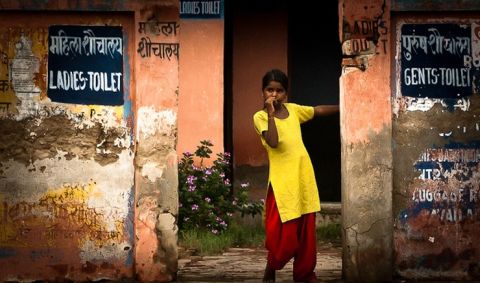 World Toilet Day is observed on 19 November every year. It seeks to raise awareness and inspire action to tackle the global sanitation crisis.

The Sustainable Development Goals (SDGs), launched in 2015, include a target to ensure everyone everywhere has access to toilets by 2030. This makes sanitation a global development priority. Jharkhand has set a target to be open defecation free (ODF) by early 2019.

The theme this year is ‘Toilets and Jobs’. Sanitation, or the lack of it, can impact livelihoods. Toilets play a crucial role in creating a strong economy, as well as improving health and protecting people’s safety and dignity, particularly women’s and girls’.

A lack of toilets at work and at home has severe impacts upon businesses through problems in the workforce – poor health, absenteeism, attrition, reduced concentration, exhaustion and decreased productivity. Loss of productivity due to illnesses caused by lack of sanitation and poor hygiene practices is estimated to cost many countries up to 5% of GDP.

Why are Toilet so Essential?

In India, over 500 million people defecate in the open due to lack of proper toilet facilities.

Dr. Madhulika Jonathan, Chief of UNICEF Jharkhand says, “The provision of proper toilets could save the lives of children as countries where open defecation is most widely practiced are the same countries with the highest numbers of under-five child deaths, high levels of under-nutrition and poverty and large wealth disparities.”

Investing in separate toilets for women and girls in workplaces and schools boost what is often referred to as the ‘girl effect’ maximizing the involvement of half the population in society.

Swachh Bharat Mission (SBM) Jharkhand focuses not only on construction of quality toilets but on behavior change and safe sanitation practices. Multi Stakeholders engagement with Self Help Group (SHGs), village organizations of the Jharkhand State Livelihood Promotion Society (JSLPS) and members of cooperatives and Village Water and Sanitation Committee (VWSC) for toilet construction and behavior change activities is key for achieving the goal of Swachh Jharkhand.

It is imperative that toilets are available and used at worksites, institutions and dhabas. The role of civil society, NGOs, CBOs and influencers for awareness generation is of utmost importance.

As per Integrated Management & Information System (IMIS) of the Ministry of Drinking Water & Sanitation, Government of India 1313 villages and 225 Panchayats have been declared open defecation free in Jharkhand.

Coverage of toilets has increased by 13% in the last two years (post 2 October 2014). However much needs to be done. Over 80% households in rural Jharkhand do not have a toilet (NSSO 2016).

· World Toilet Day will be celebrated in all targeted panchayats

· Schools will organize events such on quiz, poster competition, etc centered on sanitation

· Local Bodies such as panchayat and municipalities will participate in the campaign.