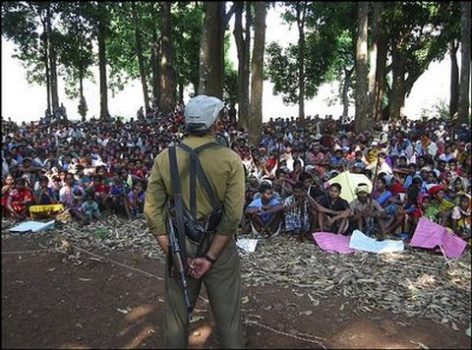 After the police recovered Rs 25 lakh cash of the PLFI chief Dinesh Gope near Ranchi, Latehar Superintendent of Police (SP) Anoop Birtharay has disclosed that the police had recorded information that Naxals are using villagers to deposit their extortion money into bank accounts so that it can be converted into legal currency.

Birtharay informed that some locals in Latehar who could be Naxal sympathisers providing logistical support to Naxals, were suspected to be involved in this illegal work.We have received tip-offs to nab those involved in the practice. Vehicle checking is also being conducted”,said Birtharay.

“We got information that some Naxals from Bihar were scheduled to hold a meeting with their Jharkhand counterparts here but panicked upon learning that police have been conducting raids to nab them,” he said.

It is learnt that some a group of people of Matlong village have been located around banks in Latehar district headquarters.They were carrying lakhs of rupees to deposit into their account so that they could help Naxals convert their ill-gotten money.

In fact,an elderly woman who was unable to even recognise notes correctly, went to a state-run bank to deposit Rs 4.5 lakh in her Jan Dhan account. She, however, went back without depositing the money, saying she was asked to show PAN card which she did not have,said the SP.

In a corner of a village a resident told a group of reporters that there are some Naxal sympathisers who are depositing the money willingly after deducting their “share” which ranges from 10 per cent to 30 per cent but in other cases, many elderly people are forced to comply with the Naxals’ instructions. “Naxals are frustrated with the government’s move demonetising Rs 500 and Rs 1,000 notes. They are threatening locals to deposit their money into banks so that the cash do not become defunct,” said a villager.

CRPF,Jharkhand,IG,Sanjay A Lathkar is learnt to have said that he had received some information that Naxals were trying to convert their money in the area. “Some people have been arrested with old notes. We are keeping a close watch on Naxals’ movement in the state and would foil any attempt by them to convert money. The state police is also looking after these inputs,” said Lathkar.