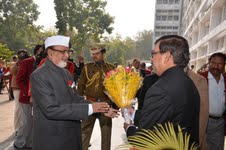 It was notified as holiday on the 116th birth anniversary of Subash Chandra Bose.But it turned out to be a day of meetings for the state government officials and staff.

Subsequently,Gupta and Kumar held meetings with top brass of the state bureaucracy.All Secretaries,Principal Secretaries and Heads of Departments were present in these meetings.

Earlier Governor Ahmad had directed the Chief Secretary SK Choudhary to review the government’s schemes such as PDS meant for the poor and accelerate the process of development without keeping any file pending.

After landing in Ranchi on Tuesday,Gupta said:”I will try to come up to the expectations of the people of Jharkhand…The people had a lot of expectations.The Naxalite violence was a major concern.We will try to find a way out of it.We will also try to see how every body is provided with a better security…”.