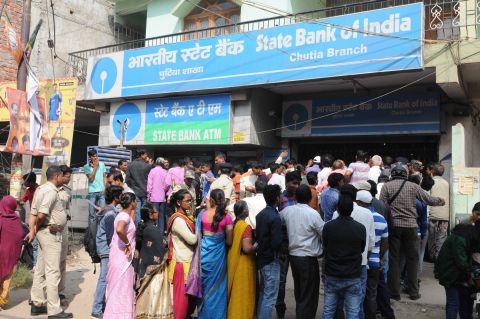 Ranchi, Jharkhand 10 October 2016 : People in a long queue outside a State Bank of India for exchange and withdraw their currency after the demonetization of Rs 500 and 1000 currency notes in Ranchi on Thursday. Photo- Ratan Lal

Banks were packed with people on Thursday when they stood in queues to exchange old demonitized Rs 500 and Rs 1000 notes.

They had also queued up to draw cash from the ATM.Many of the were spotted drawing Rs.100 notes from State bank of India’s ATM in Ranchi on November 10,2016.

Many people complained that the ATMs of different banks were not operational.”We are cashless.We are facing a terrible problem due to lack of money to buy vegetables”,cribbed Urmila Kumari,a school teacher.

These scenes were in response to  the demonetization of Rs 500 and 1000 currency notes by Prime Minister Narendra Modi on November 8,2016 night.