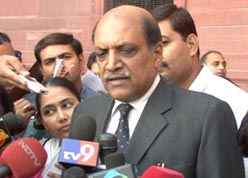 After a day of meetings with the top officials of Jharkhand today ,Governor’s Advisor Madhukar Gupta sounded sanguine about the prospect of the state.

“We have reviewed the works and fixed the responsibility”,Gupta told media persons after folding up the meetings with the Secretaries,Principal Secretaries and Heads of the Departments at the state secretariat.

In the meetings,these officials were reportedly asked to present details regarding the works done and future plans,especially the ways to expedite the processes of implementation of the development schemes and expenditure in the current fiscal-2012-13.

Since less than two and a half month was left for the financial year to end on March 31 and more than 75 percent of the fund was yet to be utilized,the task was cut out.Said a senior officer,who took part in the meeting:”This is where lies the mess in Jharkhand.”